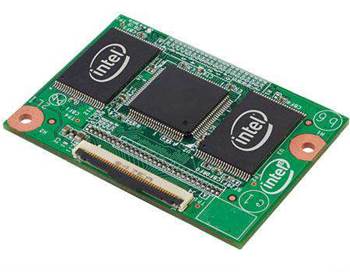 Intel has promised to deliver its first solid state hard drives (SSD) within the next month..

The drives, dubbed X18-M and X-25M will initially ship in 1.8 and 2.5 inch form factors, for the laptop and desktop sector. They will be hold 80GB but by the first quarter of 2009 Intel will also offer a 160GB version.

“We want to make it clear, we are in the solid state business,” said Troy Winslow, Intel's marketing manager for the NAND group.

“This is just the first iteration of our roadmap. We will be developing a range of products for a variety of [market] segments.”

He said that in tests the SSDs were delivering between 30 and 34 minutes extra battery life, thanks to better management of activity settings.

He said that the new drives had been designed to work well with existing operating systems and Vista performed better than XP on the drives.

Intel will also be bringing out a SSD aimed at the server sector. The X25-E Extreme will be out as a 32GB capacity drive in the next three months and the company plans to have a 64GB version out by the first quarter of 2009.

Got a news tip for our journalists? Share it with us anonymously here.
Copyright ©v3.co.uk
Tags:
hardwareinteloutlinesroadmapsolidstate