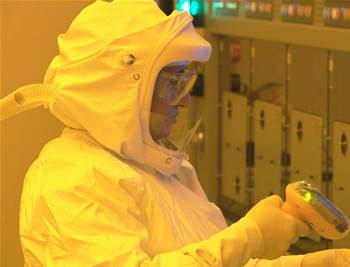 At his keynote address to the Intel Developer Forum (IDF) in San Francisco the company's general manager of architecture Sean Maloney will be showing off Intel's first 32nm processor, codenamed Westmere.

The new chip has graphics capability built into the core processor, a first for Intel, and has new Advanced Encryption Standard (AES) instructions also built in for faster encryption and decryption. The new chip will go into production in the fourth quarter of the year.

“The rapidly increasing number of transistors and processor instructions we add have made possible the integration of more and more capabilities and features within our processors,” he said.

“This has driven an incredible amount of innovation throughout the industry.”

Maloney will also be showing the Westmere-EP server platform and said that it would provide a performance boost greater than that seen with the introduction of the Xeon 5500 series of server chips over the previous generation.

Intel is also working on an ultra-low power server chip in the Xeon 3000 range, which will operate at just 30 watts.

As a follow up to Westmere the next generation chip, codenamed Sandy Bridge, will see an acceleration in graphics capabilities for the chip, with Intel's sixth generation graphics core built into the die. This will accelerate floating point, video and processor intensive software applications.

To help IT administrators Intel has developed a new PC management tool called Keyboard Video Mouse Remote Control, which allows managers to view problems directly as the user sees them, which it hopes will speed up fault solving.

Got a news tip for our journalists? Share it with us anonymously here.
Copyright ©v3.co.uk
Tags:
builtchipfirstgraphicshardwareintelprocessor