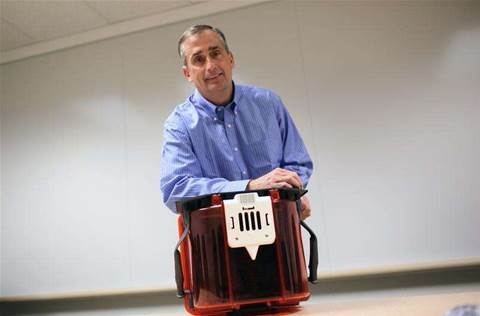 The shakeup, announced internally just days after the 30-year veteran took the helm, places most of the main product groups of the world's top chipmaker directly under the CEO's supervision and hands its sprawling global manufacturing operation to new president Renee James, said a source close to the company, who declined to be identified.

"As your CEO I am committed to making quick, informed decisions. I am committed to being bolder, moving faster, and accepting that this means changes will be made knowing that we will listen, learn and then make adjustments in order to keep pace with a rapidly changing industry," Krzanich said in the email, according to the source.

"Our business faces significant challenges, and we simply must continue to execute while finalizing our future strategy," he reportedly wrote.

Krzanich officially took over as CEO last week and said that under his leadership, the top chipmaker will be more responsive to customers in an intensified focus on the fast-growing smartphone and tablet market where it lags rivals.

After Perlmutter transfers his business groups, he and Krzanich will "define his next significant contribution at Intel," according to the email described by the source.

Intel has called the shots in the personal computer industry for decades, but it was slow to react to the explosion of smartphones and tablets. The latter two markets are now dominated by competitors like Qualcomm Inc and Samsung Electronics Co Ltd, which design their chips using architecture licensed from ARM Holdings Plc.

In his three-decade career at Intel, Krzanich has become known for making fast decisions after consulting with trusted lieutenants.

"The new devices organisation is responsible for rapidly turning brilliant technical and business model innovations into products that shape and lead markets," Krzanich said in the email, according to the source.

James, formerly head of the software arm, will now also oversee the company's sprawling global manufacturing operations and all aspects of security technology.

Mulloy said Intel presidents have traditionally been responsible for managing the manufacturing operations.

James will also lead corporate strategy and planning. Her previous job as Intel's software chief has been taken over by Doug Fisher, a senior executive from that group.

Senior Intel executives in the past have privately warned against focusing too much on catching up in smartphones and tablets at the expense of missing out on future trends in mobile.

Krzanich's creation of the "new devices" group signals he is also looking beyond today's gadgets.

"It's a matter of what they do with the new division, what can they identify and then deliver that maybe would not have otherwise been something we'd see Intel inside of. It could be very meaningful if they can execute," said Williams Financial analyst Cody Acree.

Venture capital fund Intel Capital, led by Arvind Sodhani, now reports to chief financial officer Stacy Smith instead of to the CEO. Intel's IT department, which reported to Krzanich before his appointment as CEO, will also now report to Smith.

Shares of Intel were up 0.2 percent at US$24.13 on Tuesday afternoon on the Nasdaq.