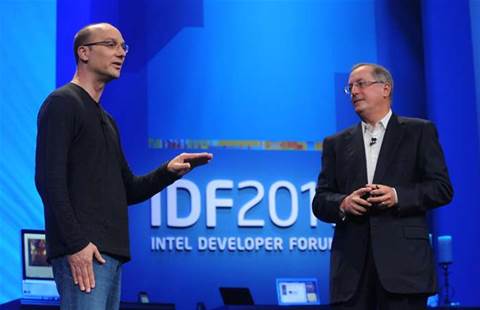 Cisco the only one suffering?

"This quarter is playing out as we thought. The enterprise is good, it's not fantastic, so we don't see a change in that," Otellini said at the chipmaker's annual investor day.

His comments come in opposition to those made by Cisco chief executive, John Chambers, who cited weaker technology spend from enterprises while forecasting quarterly earnings below initial estimates.

Shares in Cisco, which relies on government and corporate spending on internet gear, dropped more than ten percent on Thursday following its earnings report a day earlier.

"I think John's comments were focused on Europe in particular. We haven't seen any change in Europe demand on the enterprise side," Otellini said.

Much of the presentations by Otellini and other Intel executives showcased the chipmaker's long-awaited push into smartphones and ultrathin laptops. Intel offered little new hope to investors concerned about languid PC sales.

Otellini also forecast that Intel, with its deep pockets, would survive as one of a handful of leading-edge chip manufacturers as the sector moves toward larger and costlier factories.

With the industry preparing to increase the size of the silicon wafers it uses, letting manufacturers fit more chips on each, future factories will double in cost to more than $10 billion each to build, Otellini added.

With worldwide PC shipments barely growing, Intel has been racing to establish a foothold in smartphone and tablet markets, where processors based on ARM's power-efficient chip designs are widely used.

Intel is heavily promoting a PC category it has dubbed ultrabooks, similar to Apple's Macbook Air and offering some of the technological chic the iPad and other tablets epitomise.

Major manufacturers like Asus and HP are launching ultrabooks, but some investors are concerned that the expensive components used in them, such as solid-state drives, make them too pricey for many consumers.

Intel vice-president Kirk Skaugen, in charge of the ultrabook push, said the laptops are aimed at prices starting at $700.

Otellini said sales were on track and would pick up in the second half of 2012 as more manufacturers start using Intel's new Ivy Bridge processor for PCs.

"We're on track to meet our goal of 40 percent of consumer notebooks this holiday season being ultrabooks," Otellini said.

Global PC shipments in the first quarter grew a tepid 1.9 percent from a year ago, according to research firm Gartner.