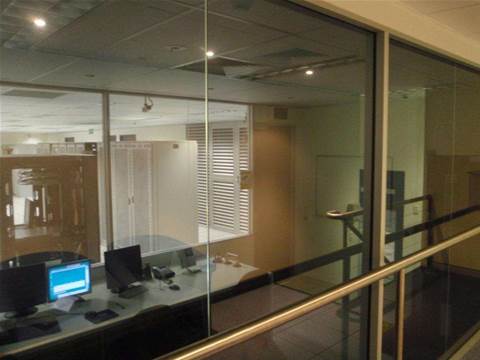 iTnews takes a look at how the old Baltimore Technologies data centre in northern Sydney is getting a new lease on life.

manageNET is planning the first major refresh of its managed services and colo data centre since acquiring the facility in 2005, with new racks, overhead cabling and hot/cold aisle containment solutions all potentially on the cards.

It was originally built by Baltimore Technologies back in 2000 and underwent a series of tenancy changes before manageNET took hold of it in 2005.

“We bought the site as it was,” said Con Dalamangas, chief technical officer of manageNET.

“It was built in 2000 with best practices [at the time]. We didn’t have to touch anything.”

After some four years at the site, however, manageNET is looking to make its first changes.

“You’ve always got to be looking at how you can refresh,” said James Baker, a senior network engineer at manageNET.

“We’re looking at things like hot/cold aisles and how we can extend the life of the data centre from a cooling perspective.

“The equipment isn’t contained in any way at this point but we know that small changes could make a big difference to the centre’s heat load and capacity,” said Baker.

The centre runs on a typical raised floor; cool air is directed through vents located in front of the racks and drawn though perforated doors to the equipment.

Cabling is also under-floor, although this could feasibly change as part of the refresh cycle, according to Baker.

“There’s a false ceiling but we’re not running anything overhead at the moment,” said Baker.

“All services run under the floor but that will likely change as we move to new rack designs.”

Apart from efficiency, one of the reasons manageNET is looking to refresh is to free up floor space and prolong the life of the centre.

“We’ve got limited floor space that we have to use intelligently,” said Baker.

“Virtualisation and blade architectures could help us get more out of that. Some of the new blade servers from Dell are interesting but they came out after we committed [to our current architecture].”

For the most part, manageNET has standardised on Dell PowerEdge 1950 servers ‘maxed out with 32GB of memory’. Blades were considered at the beginning but technical and pricing issues made them unsuitable.

“The blade options we looked at back then either didn’t have the right port density or were so expensive that it blew the idea out of the water,” explained Baker.

On the physical side, the centre runs dual Liebert CRACs in an N+1 redundant configuration, Chloride UPS, a VESDA fire system, and a near-new Petbow diesel-powered generator.

“The gen kicked in for the first time during a major blackout a couple of months ago,” said Baker.

“We do monthly start-ups on it and keep refueling it on-the-fly.”

The data centre has a network operations centre (NOC) onsite as well as office space that is currently let to some of its managed services clients.