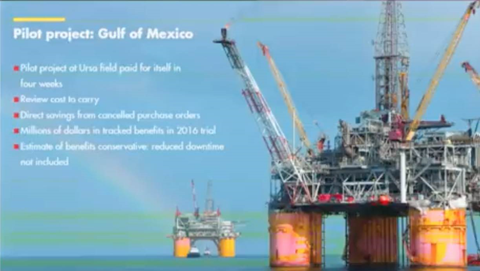 Shell is deploying a data science tool globally to help it manage and optimise the $1 billion in spare part inventory it holds in case something breaks on its assets.

The project was little more than an idea 18 months ago, but following a successful development and proof-of-concept on two deepwater rigs in the Gulf of Mexico, it is now earmarked for use by the company’s inventory analysts globally.

“We have a huge number of assets globally, and most of those assets carry some amount of spare part inventory,” Shell advanced analytics general manager Daniel Jeavons told the recent Spark Summit Europe.

“This is safety stock - pieces of equipment that we store in warehouses so that if something goes wrong on one of these assets we’re able to provide a spare part quickly to get the asset up and running again.

“Shell has over a billion dollars of spare part inventory at any point in time and if you can optimise it, the business benefits are pretty spectacular.”

The company has traditionally stockpiled spares because operations are often remote, making it hard to ship parts.

“We operate pretty distributed and complex supply chains where it’s not always easy to get a spare part out to the location quickly, and what’s more, some of these spare parts are highly specialised pieces of equipment and therefore they’re actually quite hard to get and have very long lead times,” Jeavons said.

Depending on how critical the part is to equipment operations, having a spare close at hand means downtime can be limited.

“There’s a bit of risk aversion from the business in terms of trying to make sure that they always had the right level of stock, and therefore stockpiling some of these things, particularly in high oil price environments where the cost of downtime was extremely high,” Jeavons said.

“We’ve had the inverse of that where as the oil price dipped there was actually a need to free up working capital.

“Reducing spare part inventory is one of those ways but are we reducing the right spare parts? That was always the question.”

Shell had an existing inventory optimisation and analysis discipline but it operated inconsistently on a global basis.

That led to a request from part of the business 18 months ago to see if data science could lend a hand.

“What we did is put together an agile working team [tasked with] developing a prototype tool that would work specifically for the Gulf of Mexico in the first instance for two specific assets called Ursa and Brutus, and develop an algorithm that would provide optimum levels of spare parts for those two assets based on their current operations,” Jeavons said.

“We wanted to do that in a web tool that would allow an inventory analyst to interact with recommendations that came from the algorithms that we were going to build.

“We also wanted to allow the inventory analyst to look at not just the recommendations but also ask ‘why’ - [looking at] the consumption history of that spare part, the system lead time, the equipment that it related to, and ... the criticality of that equipment.”

The first version of the tool saw Shell extract historical-based issue data from its SAP HANA ERP system and run the data through algorithms on a basic laptop.

The team later upgraded the hardware to “an offline high performance 48 core PC” but it still took 48 hours to simulate all the possible stock levels to meet different service availability thresholds.

Because the tool is intended to aid decision making, but leave the actual decisions to inventory analysts, it provides a range of options and a recommendation of the optimum amount of spares needed for a particular part.

It partially bases this recommendation on a “criticality score” attached to the part: how badly a spare is needed if the production one breaks.

“We calculate [need] on the basis of the criticality which we translated into a service level:  how many items would we need to have in stock at any one time?” Jeavons said.

“The key thing we’re trying to do is estimate what is the most appropriate reorder point. How many do we need in stock to last us, say, 30 days?” he said.

“What we want to do there is estimate the different service levels as well because if there’s a really critical part you want to make sure it’s available 95 percent or 99 percent of the time, whereas a less critical part you can live with 80 percent [availability].

“This is commonly referred to as safety stock analysis.”

Inventory analysts access the options and recommendations via an HTML5 frontend.

The team trialled the tool on its two deepwater rigs in the Gulf of Mexico. It was highly successful.

“We saw straight away as we rolled this out [that if] we could combine the data science with clear explanations of what we were doing and why this was right, as well as providing [the business] with decision support information in a single web portal, we were able to deliver millions of dollars of business benefit in a very short period of time,” Jeavons said.

“In fact, this proof-of-concept paid for itself in about four weeks.

“In addition, we’d only looked purely at the inventory reduction. We didn’t look at the impact of actually having the right stock available, which is equally important because that has a far bigger business impact because of the avoidance of downtime.”

The trial success was noted by other parts of Shell’s Gulf of Mexico business.

“They got very excited,” Jeavons said.

“We [also] generated a problem for ourselves, because in our proof-of-concept mode we’d done it on a very simple laptop, we’d loaded it onto a server, made it available in an HTML5 web portal, and it worked great.

“But if we wanted to scale this up we needed to make it repeatable. Shell has literally millions of spare part inventory stored in different warehouses across the globe, and very quickly they wanted to turn this into a global tool.

“And so we needed to think of an approach that allowed us to take the work and scale it up.”

The team still take inventory data from the SAP HANA ERP database, but they now use Alteryx to transfer it into an S3 bucket, from which it is then routed through a Databricks Spark cluster.

The results are written back into HANA, and surfaced through the HTML5 web portal.

The extra computational power underpinning the models meant the time taken to simulate the stock levels was cut from 48 hours to four hours.

“What’s nice about it as well is you don’t have to explicitly state how you parallelise the problem. Spark implicitly does that for you,” Jones said.

Databricks came up with a further way to restructure the way the tool worked, which allowed the team to shave more time off the process.

It is now down to 45 minutes per cycle, and has the architecture required to deploy it globally.

“We were able to take a tool that previously would have been fairly localised to a single region and turn that into a global product which actually is now becoming the foundation for the way our inventory analysts will now do their work,” Jeavons said.

“What’s also important is by making it available as a digital solution, we were able to change the way they do their jobs on a day-to-day basis.

“And because they were embedded in this project from the start and they dictated the data they wanted to see around the algorithms, [the analysts are] starting to use the tool we’ve developed in ways that we hadn’t previously envisaged.”

“We’re now partnering with our global IT organisation to roll this out initially across upstream - which is going live at the moment - and we’ll roll this out shortly across the global downstream business as well,” Jeavons said.

“We’re also looking at independent use of the algorithm - it potentially has many other applications for ourselves and our partners.

“We’re talking to them about can we help if they have similar problems.”