The Queensland government has opened a new $2 million vessel tracking centre overlooking the Port of Gladstone to cope with the increase in traffic expected as new gas shipping facilities come online in coming months.

The high-tech facility will run 24/7 and has been funded by the LNG industry in partnership with the government-owned Gladstone Ports Corporation.

The Port of Gladstone is Queensland’s largest multi-commodity port and is home to the world’s fourth largest coal export terminal.

The Port of Gladstone (source: Queensland Transport and Main Roads)

The Port of Gladstone boasts a port-wide radar system that tracks the movements of every vessel longer than 10 metres in the harbout.

A multitracker controller, radar display processors and associated systems are being set up inside the tracking centre itself.

All work vessels operating within the Port of Gladstone have been mandated to utilise an Automatic Information System (AIS) based on class A and class B transponders onboard the ships, depending on their size.

The ship’s transponder relays important details like its name, speed, and size back to the tracking centre as well as to surrounding ships. 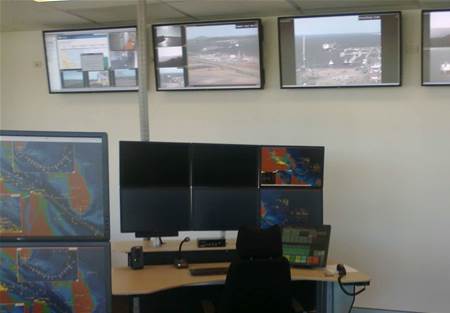 The AIS also enables virtual navigation guides which allow crew to electronically map points of interest such as hidden hazards and channels onto their onboard mapping systems.

A network of sensors and other gadgets, linked by IP-based radio communications, allows the vessel tracking centre to monitor where and how fast water flows are heading, in order to maintain the safety of the port.

Horizontal acoustic doppler current profilers (ADCP) have been mounted to beacons at strategic points throughout the harbour to track the speed and direction of currents, including in the middle of a channel, and relay this information back to the centre.

The Department of Science, IT, Innovation and the Arts (DSITIA) has installed a Datawell buoy inside the port as well, which delivers information about the height and direction of waves to the monitors in real time upon receipt of a polling request.

Ultrasounds have been deployed to measure wind speed and direction.

Inside the vessel tracking centre, which is perched high above the harbour with panoramic views of the harbour below, staff can switch between any of the systems listed above on their monitors, and can also elect to transmit images to the Incident Control Centre in Gladstone in the case of a maritime incident. 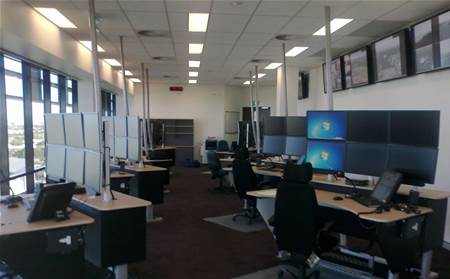 A GPS time source system is used to make sure all the data sources are synchronised to the exact same time code, and a voice recorder stores all incoming and outgoing communications through the centre just in case they need to be reviewed following an incident.

Staff inside the centre can also control a large-scale CCTV network that completely covers the port using a software based surveillance system from DVTEL. The system allows them to direct any cameras in the port to pan, tilt or zoom on demand.