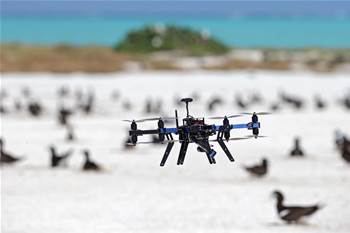 Cops in the sky.

NSW Police's special services group is tinkering with drone technology as it considers a force-wide capability of up to 100 machines controlled by 60 trained pilots.

Starting from a $66,000 grant to train seven pilots and buy a bunch of test systems, chief inspector Stefan Kent has stood up a "small" rotor wing capability within the state's police force that is already starting to prove its worth.

Speaking to Informa's Police Technology Forum in Canberra this week, Kent said the "bang for your buck is impossible to ignore".

He and his team have flown drones over cliff faces to search for bodies and identify safe paths for rescuers, they've modelled the impact of simulated explosions in built up areas, and have mapped criminal routes from the sky using their new collection of flying machines - all without having to send in expensive manned aircraft.

Kent said road accidents represented a particular opportunity to capture comprehensive images of the scene of an incident as quickly as possible.

"It costs a million dollars an hour or something to have the F3 shut. We can get an image of the crime scene or the crash scene in anywhere from five to 15 minutes," he said.

Filming live shooter exercises has also highlighted the tactical applications of the machines.

"You can get that footage straight to tactical command, you can see obstacles, you can see people hiding behing buildings, you can see runners going out the back door," Kent told conference delegates.

Kent's drone of choice is the DJI Inspire, which records 4K video and takes 12 megapixel stills. The next model up offers a better camera and integration with a range of forensic and mapping platforms, he said.

The NSW Police's remote piloted aircraft systems (RPAS) unit was created out of a report from the rescue and bomb disposal squad which pointed to the potential benefits of unmanned aircraft.

After early success, Kent's team is now working on a business case to NSW Treasury for funding to expand the drone operations. He said it costs about $10,000 to properly train an RPAS pilot, but hiring engineers is also essential to the program.

And there are still a number of other battles to fight for Kent's group.

Some of the issues around the forensic viability of drone-captured evidence, such as measurements taken of a photographed crime scene, are yet to be nutted out from a legal perspective. The NSW Police is also in consultation with the Civil Aviation Safety Authority about staying within the parameters of flight regulations.

Public perception is also a big issue for Kent - he says individuals "always thinks the police are going to look in through their bedroom window".

He steers clear of the 'd' word (drone) and the 's' word (surveillance) because of the negative connotations they carry.

However, he said his unit had called in the advice of NSW Privacy Commissioner Elizabeth Coombs from the very beginning and claimed she was happy with its operations.

"Any focus on privacy should be technology agnostic. At the end of the day this is just the same as an iPhone or a selfie stick," Kent said.