Inside Defence's struggle with a data deluge 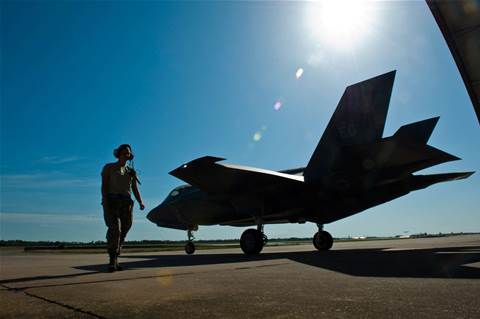 RAAF pilot gets ready to fly the F-35 for the first time in Florida (Source: Department of Defence)

New fighter jets will create hundreds of gigabytes of data every flight.

Each time the Australian Defence Force’s new F-35 Joint Strike Fighters land, they will upload hundreds of gigabytes of data to the department, leaving Defence CIO Peter Lawrence with the job of figuring out what to do with all the information.

The first F-35 will land in Australia in 2018, thanks to a $12.4 billion investment by the Australian government into the new fleet.

Kitted out with sensors tracking almost everything that happens after take-off, the new fighter jets add to the growing internet-of-things Lawrence is now forced to contend with in the modern age of warfare.

“If you’ve got a squadron of them, or even half-a-dozen landing very quickly, that is suddenly terabytes of data,” Lawrence told delegates at the Canberra Technology in Government conference on Wednesday.

Add a fleet of modern Navy vessels also packed with sensors, plus ‘smart’ Army groundforces, and the information management conundrum very quickly gets even bigger.

But Lawrence says it's not the storage or the movement of this data that poses the challenge: it's filtering the onslaught in a way that ensures meaning isn’t drowned out by volume.

“We’ve got to think about what is important in there. What do we need to keep? How do we process it? How do we understand it?” he said.

He thinks the battles of the future will be decided by data.

“The adversary that can make data [into] actionable knowledge the fastest will win the fight,” he said.

“So you will see us put a lot of effort into information management in the next years.”

Far away from the battlefield, the Department of Defence’s relatively peaceful Canberra back office is dealing with the same sort of issues.

Lawrence and CFO Phillip Prior struggle daily against the weight of 300 different systems to produce something reliable enough that will allow them to make management decisions.

“Reconciling that is not very easy - in fact we don’t, because it is just too difficult. So we have an environment where we take information from one place and then we will pull data from other sources and try to make that a system of record effectively," Lawrence said.

“But we cannot necessarily follow the flow and get back to the source of the truth.”

While the Defence executive concedes the IT environment he runs “has some unique attributes to it” he said he suspects most CIOs are dealing with the same challenge.

“I suspect most of us are asking the same question. What is information that drives decision making and how do we make it available to the right person, at the right time, in the right place?”

Information management was singled out as a historical problem for Defence in the government's "first principles" review.

The department was ordered to long, hard look at its IT environment following the report's scathing assessment.

It identified a "proliferation of structures, processes and systems with unclear accountabilities" which had created "institutionalised waste, delayed decisions, flawed execution, duplication, over escalation of issues for decision and low engagement levels".

Similarly, operational effectiveness had been impacted by inadequate interoperability between platforms - alongside a "costly and complex application landscape", the report found.

It advised the department to standardise its business and information processes, among other things, in order for the agency to become a single, integrated organisation.

In May the agency took one of its first steps along this journey - beginning efforts to completely overhaul its business processes with ERP as a centrepiece.