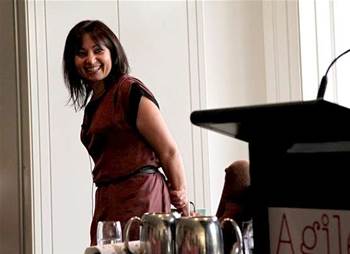 According to Agile transformation lead Sandra Dalli, waterfall projects had taken the bank 12 to 24 months to deliver.

“We once spent $3 million to build a set of requirements – but the customer had spent so much that they didn't want to spend any more actually delivering the system,” she noted.

So they made a play for executive support, taking several Bankwest executives to visit high-profile Agile shop Lonely Planet in 2010.

That year, Bankwest executives announced that half of its projects would be built using Agile methods by the end of 2012.

Then came Project Agile – a move by McAllister and Dalli to leverage the growing momentum to completely overhaul Bankwest’s project management practices in the space of about nine months.

"It was about six months before they [plans] started to die," Dalli explained. "Without the passion, people didn't understand Agile or the value that was in it for them. So they lost interest.

“We learned that we had built an operating model of changes we wanted to happen, that was too big for us."

Investigations revealed that many staff were mentally organising their work into Agile and non-Agile processes, alternating between Agile and waterfall-style behaviours.

"They didn't understand that they didn't have to wait for an Agile project to get value in delivering something this way," McAllister recalled.

"Our people were getting really frustrated – and we were at risk of losing them, and losing the energy we had built in the early days."

Trainers focused on teaching Agile as an organisation culture rather than project management methodology, promoting Agile practices as well as values from “a more holistic point of view”.

But there were still holdouts. A "deep dive analysis" revealed that training "had missed the middle layer," McAllister said. "There was still apprehension about change."

Bankwest pinned the apprehension on the scant focus on people management to date. Those who were naturally inclined towards Agile embraced it enthusiastically, but holdouts were still falling into old patterns.

A people change consultant ran a new set of training programs to foster a new approach to Agile, with proponents focusing on selling 'user stories' designed to relate Agile ideas to all kinds of different roles.

"We started to see little pockets of Agile popping up and less reliance on the Agile coach," McAllister recalled.

An experimental focus on the company's e-commerce business group "built the capability in that area, so we could walk away and know they would be self-sufficient,” she said.

Since reworking its Agile effort as a people-empowerment strategy, BankWest has seen the card walls sprouting once again.

Seventy percent of IT and business staff have worked through fortnightly Agile training, while one recent count saw over 90 physical card walls and 500 sets of cards being used by individuals or operational teams.

Many of these teams, Dalli says, are outside of the IT organisation – reflecting the extent of the Agile change across the company, and confirming the most significant lesson learned to date.

"You don't have to be on an Agile project to be agile," she explained.

"In the end, it's people that drive change – and you really need to tell people on the ground that they can apply Agile principles to anything. It's not about one thing you do; it's everything you do."