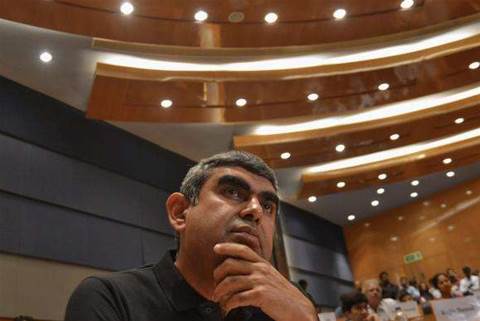 Indian outsourcing giant Infosys has appointed an outsider, Vishal Sikka, to take over as CEO.

Sikka is equally comfortable designing cutting-edge software as he is negotiating in the boardroom, skills the new chief executive will need to turn around a company that was once the poster child of India's US$108 billion IT services industry.

He is a former senior executive at German software giant SAP, and takes over as India's second largest IT services exporter struggles to retain staff and market share.

Some investors blame its outgoing risk-averse management for blunting the innovative edge of a company that was once the employer of choice for young IT workers.

Employees at SAP and business associates told Reuters that Sikka was seen as the bridge between the "brains" - the IT engineers that helped him create the flagship HANA program and the besuited executives that spearheaded product sales globally. He was also SAP's first chief technology officer.

"He was on the board at SAP and he ran all development on the technology and application side. That says it right there," said Donald Feinberg, a US-based executive at IT consultancy Gartner, who used to be the lead analyst for SAP and who has known Sikka for five years.

Sikka's skills will come in handy as investors expect him to move Infosys towards high-margin, high tech services like cloud computing and away from the low-margin, labor intensive outsourcing contracts that it battles for against peers Tata Consultancy Services and Wipro.

Colleagues say he is a demanding but communicative manager whose persistence helped bring HANA to life. The program, which took several years to develop, analyses large amounts of data quickly and clients include Unilever, Lenovo, Lonmin, Deloitte & and Procter & Gamble.

"Vishal iss a visionary and one of the smartest guys in the Valley," said Vivek Ranadive, CEO of US firm Tibco Software who has been friends with Sikka since meeting him at an airport seven years ago.

Sikka, 47, is an American citizen who was born in Vadodara in western India. He currently lives in Los Altos, California with his wife and two boys and has said he plans to travel to India for the new job.

A graduate of Stanford University, Sikka is held in great respect by IT executives in Silicon Valley for his humility, his sharp mind and his enthusiasm, friends and colleagues say.

"He's a man of varied interests, but his passion is technology," said Ranadive.

The choice to give Sikka the top job at Infosys must not have been easy for founder and outgoing executive chairman N.R. Narayana Murthy, who was brought back from retirement last year to help turn around the company. Infosys has always picked its CEO from among its founders, and Sikka is the first outsider.

But Infosys lead independent director K.V. Kamath, who along with Murthy was in charge of finding the next CEO, said Sikka had beaten all other candidates because he best fit the bill of a "transitional" chief.

Investor pressure for a change of guard at Infosys intensified after Murthy's return triggered the staff exodus and management uncertainty.

"With age on his side, Sikka should be able to make long-term strategies and goals, which is a good thing for Infosys. It brings stability," said Ankita Somani, Mumbai-based analyst at MSFL Research Institutional Business Group.

Sikka's term at Infosys is for five years and he is to be given a free hand to chalk his own way as all the founders at Infosys will step down by end-July.

His tenure at SAP, however, was not without conflict.

Sikka quit SAP amid rumors of a power struggle within the company. Employees who worked with him or reported to him also told Reuters he tends to hog the limelight. After Sikka, SAP CEO Bill McDermott told reporters they would get more access to engineers at company events from then on.

Analyst Feinberg said one of Sikka's first tasks would be to build a team at Infosys, which has lost many senior executives in the past year.

"There's basically nobody in the IT business in management who does not know who Vishal Sikka is. Just by that he should be able to get the people he wants to work for him," he said.