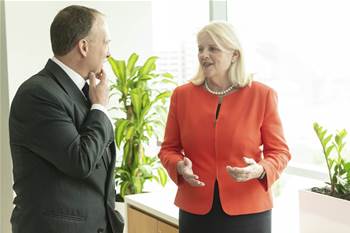 40 percent of new roles to be graduates.

An already hot market for technology talent in Australia is set to intensify after Indian technology services and outsourcing behemoth Infosys committed to creating another 1200 positions within its local operations in the wake of the abolition of 457 skilled visa class.

The favoured tech body shop of big corporates and banks said on Tuesday the new roles will be created in just over a year through the creation of three new local “Innovation Hubs”, the location of which is yet to be formalized but is most likely to be in Sydney, Melbourne and Brisbane.

The big commitment to put more leather on the ground in Australia comes as both the corporate and government sectors compete to entice tech professionals to join their ranks as major transformation projects to automate transactions, business processes and customer service all hit simultaneously.

The official line from the Infosys is that the local hiring spree isn't linked to the 457 visa cull.

"This is purely part of the global localisation strategy," a spokesperson for Infosys' public relations and lobbying firm said in a statement, pointing to a slide deck effectively consisting of a single diagram.

The strong demand for IT and tech-related jobs is a boom for the tertiary education sector, with many institutions including Sydney’s UTS spruiking strong pre-graduation employment placements as a drawcard to undergraduate and post-grad students looking to move straight into roles.

Infosys said around 40 percent of its new roles “will be Australian university graduates from a range of fields including computer science and design”.

The hiring spree will swell the company’s local workforce from 4400 to 5600 positions, a boost federal Minister for Industry, Science and Technology, the Karen Andrews wasted no time in trumpeting.

“It’s a great vote of confidence in our economy and the Coalition Government’s commitment to jobs of the future, that a company of Infosys’ global standing would make this kind of investment here,” Andrews said.

Andrew Groth, Infosys’ Australian chief said “the expansion of our Australian team, together with our planned Innovation Hubs are very important as we help navigate our clients in their digital journey by simultaneously renewing their core business systems and building new solutions to realise growth.”

However the big unspoken in the announcement is that many technology suppliers are still reeling from the abolition of the hugely popular subclass 457 skilled visa that allowed corporates and their suppliers to sponsor skilled tech labour into Australia.

While a clear part of the policy intention was to increase domestic onshore hiring and clamp down labour arbitrageur rorts, the jury is still out as to whether there is enough skilled local labour to fill demand.

The  457 visa – which was partly architected by former Fujitsu Australia head Neville Roach AO in the 1980s – was controversially junked mid-2017 in favour of a more doctrinaire Temporary Skill Shortage (TSS) provoking as strong backlash from the local tech industry.

Among the sharpest critics were Australian software exporters including Atlassian who were backed by international companies also operating here, including Google.

Google in January this year revealed it had been forced to change its own local hiring policy early this year in response to the 457 visa abolition, criticising the removal of business critical skills from longer term visas.

However foreign outsourcers, especially those competing on price, had long been suspected of manipulating the 457 scheme by paying the necessary PAYG withholding component to meet minimum salary requirements onshore, but then shifting the remainder of employee payments to offshore remittance out of the view of the Australian Taxation Office and Immigration compliance units.

Abuses of the 457 scheme in sectors outside the technology, like construction, mining and food services, also contributed to the crackdown.

But on Tuesday it was all it was all smiles for the government as the new hires were announced, especially as the price of labour appears to be ticking-up after a prolonged period of stagnation.

In June Reserve Bank Governor Philip Lowe singled out businesses struggling with technology and a two-speed effect as a reason why wages growth had remained stuck to around 2 percent.