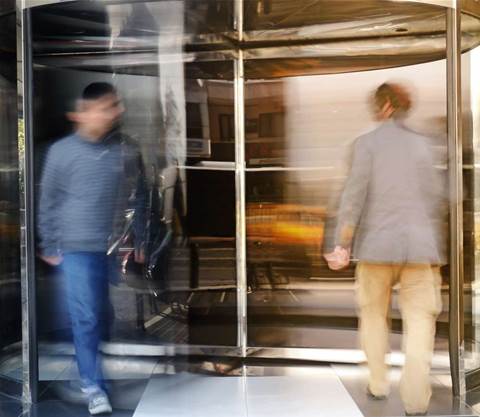 Infosys, once a bellwether for India's US$100 billion-plus IT outsourcing industry, is losing its cachet as the employer of choice for a generation of young IT workers, with staff leaving at an unprecedented pace as the Bangalore-based company struggles to regain ground lost to rivals.

Current and former Infosys staff interviewed by Reuters say morale has been dented by a series of senior management exits and worries about career prospects as the company's revenue and pay increases grow at a slower rate than at competitors such as Tata Consultancy Services (TCS).

Annual revenue in the year to end-March rose 24 percent, lagging growth of 29 percent at TCS.

The annualised rate of attrition at Infosys - effectively the number of staff leaving or retiring - was a record 18.7 percent at end-March, 2.4 percentage points higher than a year earlier. That's close to a fifth of the company's workforce of more than 160,000.

The attrition rate at market leader TCS was 11.3 percent.

India's outsourcing services industry has relied for years on an army of engineering graduates to build so-called "bench strength", key to winning new contracts in an increasingly competitive industry.

A strong "bench" signals to prospective clients that the firm can assign enough technicians to new projects. That signal is weaker when the number of staff quitting a company rises to uncomfortable levels. It also does little to attract new hires in the close-knit IT world.

"We were all excited when we joined Infy," said Sandeep Chaudhary, who last month quit Infosys after two years to go and work at a rival. "It has the best training and campus, but the company fails to utilise the training it gives its employees."

"Such high levels of attrition could impact revenue acceleration," it added.

Infosys president Pravin Rao, a leading candidate to take over as CEO when S.D. Shibulal retires in January, acknowledged that attrition is higher than the 12-13 percent rate the company is comfortable with.

Rao said Infosys is taking steps to stem the flow of those leaving, such as restoring regular April pay rises, having more frequent reviews for promotion, fast-tracking promotion for high achievers and increasing the fixed component in paychecks. In the past year, it has also held more 'town hall' meetings and 'jam sessions' where staff can speak informally with management.

"Yes, as a company we're seeing challenges on growth, and when growth does not happen opportunities get limited so attrition rises," Rao said in a phone interview.

He noted Infosys is hiring aggressively in sales, and expected attrition rates would return towards more acceptable levels in the coming quarters.

"We're confident that once these changes start sinking in ... and growth comes back, attrition will come down," he said.

Some investors remain wary, however.

"If you lose too many people you have to redeploy them and clients don't like that. I'd say it's the biggest issue at the company right now," Bhavin Shah, CEO of investment bank Equirius Capital, said by phone from Ahmedabad, noting the high levels of attrition made him cautious on Infosys shares.

Infosys was founded in 1981 when seven engineers, including N.R. Narayana Murthy, pooled US$250 - mostly borrowed from their wives. The company's rapid growth kick-started the outsourcing movement in India and coined the term 'to be Bangalore-d'.

New company hires are put on a 23-week training program regarded as among the best in the industry, and work in a Silicon Valley-style headquarters campus on sprawling grounds, with multi-cuisine food courts and state-of-the-art gymnasiums. Employee stock options helped make some of India's first salaried millionaires.

In recent years, however, Infosys has been criticised for not changing with the times, for being too conservative in chasing new business and, at times, for depending too much on Murthy, which some investors and analysts say has hobbled the development of new leadership.

A revamp, dubbed "Infosys 3.0", aimed to move the company up the value chain but fell short of expectations, prompting the return of Murthy from retirement last June to try to revive its fortunes.

But his return, with his son Rohan as his executive assistant, saw at least nine senior executives depart amid a reshuffle of teams and titles. Some Infosys insiders say Murthy's return was aimed at grooming Rohan for the top job, prompting confusion and damaging morale.

"When senior management leaves in bunches, we begin to wonder if it's a sinking ship," said one Bangalore-based software consultant who has worked at Infosys for six years, but who didn't want to be named as company policy doesn't allow staff to speak to the media.

Most of the 18 current and former Infosys employees whom Reuters spoke to declined to be named.

Not everyone at Infosys wants out, and some said they were confident that Murthy's turnaround efforts would succeed.

"These are hard times for Infy and a lot of employees are leaving. But I think these measures taken by Mr. Murthy are good," said another 6-year Infosys 'veteran', who plans to stay.