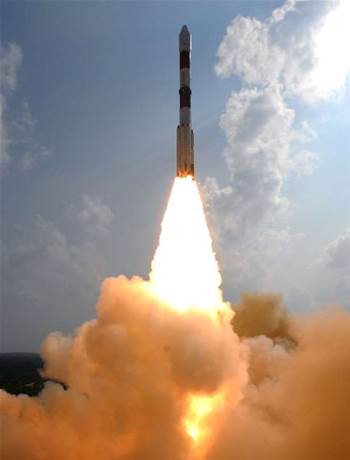 The Indian PSLV C25 rocket blasting off with the Mars Orbiter onboard. Source: ISRO.

Known as Mangalyaan, the space craft was launched by the Polar Satellite Launch Vehicle C25 from the Sriharikota space port in the Indian state of Andhra Pradesh yesterday.

The cost of the Mars mission is said to be US$73 million (A$77 million) and there will be both scientific and technological objectives to achieve such as studying the atmosphere and surface of the Red Planet and testing deep space communication, navigation, mission planning and management the Indian Space Research Organisation (ISRO) said.

Payloads for the Mars Orbiter include a Lyman Alpha Photometer or LAP to measure deuterium and hydrogen in the upper atmosphere of the planet, a methane sensor and a quadruple mass spectrometer.

A tri-colour camera for imaging the surface of Mars along with a thermal infrared spectrometer is also carried by the Mars Orbiter.

Australia's Deep Space Network station in Canberra will be one of the ground segments tracking the Indian space craft, along with other such facilities around the world.

The successful launch by the Indians follows the Phobos Grunt project that failed to hoist a Chinese satellite to Mars in 2011, using a Russian rocket.