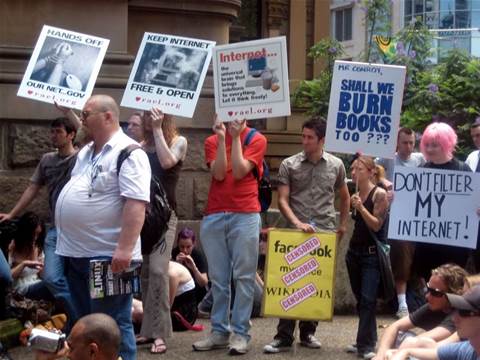 Falling short of the Digital Liberty Coalition's goal of 15,000 protesters, the organisers nonetheless said the event had been "a great success".

At Sydney's Town Hall, protesters sweltered in 35 degree heat to hear speakers talk about the effects of filtering.

Sam Russell, one of the organisers, said that he's organising a "how to" of filter circumvention, in conjunction with fellow protesters.

"We've raised a number of ways to do it, from the basic to the ornate. I'm sure that technically-minded people can imagine the ornate. But on the basic side, anyone can readily implement a virtual private network (VPN). The last time I priced long-term access it was $5 per month."

He told the crowd that he was concerned about people using the filters to block material they object to, such as negative political speech.

"If it is simply a matter of calling ACMA [Australian Communications and Media Authority] and getting things blocked, then people with sufficiently deep pockets will call ACMA and block things they disagree with."

The Digital Liberty Coalition plans to hold one protest each month until March, when it is holding a 'March on March' rally at Parliament House, Canberra.