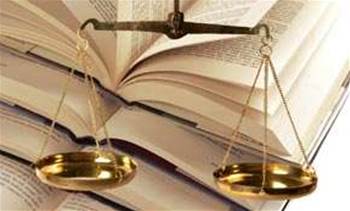 Twist in contest over copyright enforcement.

Communications Alliance counsel Patrick Flynn has accused rights holders of "setting up" internet providers by delivering them an ultimatum to become copyright enforcers or be sued.

Flynn appeared as amicus curiae at the close of the second day of High Court hearings in Canberra being between ISP iiNet and 34 film and TV studios, which are represented by the Australian Federation Against Copyright Theft (AFACT).

Copyright owners were seeking to use the ISP’s ultimate power of disconnection as an indirect way to enforce their rights, he said.

“What is sought to be done, really, by the copyright owners is to speak softly to the infringers but carry a big stick, and the big stick is the internet service provider’s power to disconnect.”

“The debate over who is responsible for enforcing the possible exposure to threats action means that one starts the inquiry in a reasonably artificial situation where there are already lawyers at 20 paces,” Flynn said.

It was clear that steps were being taken by rights holders “designed to both threaten and then invoke concept of authorisation [to ISPs], unless unspecified steps are taken to prevent the infringement.”

“It needs to be weighed in the balance in saying, 'Does this conduct in refusing bear the character of authorising?”

A new risk for ISPs

Meanwhie, ISPs face a new risk of breaching the Copyright Act if warning notices they pass on to users about allegedly infringing activities are seen as “groundless threats” under s202 of the Act.

Section 202 stated that a person aggrieved by threats of legal action can apply to the courts to have the threat declared "unjustifiable, [gain] an injunction against the continuance of the threats, and ... recover damages."

Justice William Gummow noted that the operation of s202 had be taken into account if ISPs were forced to issue warning notices to their users to avoid breaching the Copyright Act’s authorisation provision.

Counsel for iiNet Richard Cobden said there was a real potential of an ISP falling foul of s202.

In this scenario, iiNet would be the “threatener”, its customer the threatened party and that action will succeed, if threats are unjustifiable, Cobden said.

“There is no other way to get out of it being unjustifiable unless you can demonstrate that the action was an infringement of the copyright," he said.

"The tougher [the warning notice] gets, the more danger there is [for an ISP] under section 202.”

In any event, Cobden said it was not reasonable for iiNet to issuing warnings only.

“Even today when everyone says just issue a warning only, it always turns into a warning plus a termination,” Cobden said.

“It was not reasonable for us to embark upon that graduated response given the way the information had been given to us and what we knew about the information.”

This was unreasonable and a disproportionate use of the ISP’s power, he said.

Though yet to be disclosed, it involves suspension of a user’s account until the identified films, the subject of past infringements, had been removed from their system and no longer available to BitTorrent clients, according to Justice Susan Crennan.

Flynn said this form of relief was still unreasonable as it would only affect works prevented during the currency of the suspension.

“It will not be the case that during the suspension all works other than infringing works can be used.”

The High Court proceedings will wind-up at lunch-time today after final responses from counsel for the studios and iiNet.

Transcript of the second day's proceedings are available here. For up-to-the-minute coverage of the case from our reporter on the ground in Canberra, stay tuned to iTnews here.