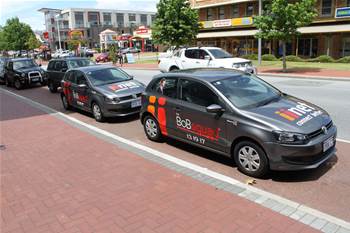 Internet service provider iiNet will offer its BoB Squad mobile helpdesk service to customers in Sydney and Melbourne from next month.

Residential customers will be able to book help from iiNet desk staff to troubleshoot internet issues or set up BoB devices and any other device connected to the iiNet network - such as modems, PCs, gaming consoles, smart TVs and tablets - on-site.

The help desk staff are charged out at $99 for the first hour and $45 per additional hour.

The service employs 12 in Perth, where it has operated for 12 months. Six staff from Sydney and Perth have been trained in the Perth call centre to learn about iiNet products and services before taking to the road.

Today iiNet staff told iTnews that the service has improved the ISP's Net Promoter Scores and helped to teach customers to help themselves via iiNet's customer self-help portal.

The costs of vehicle leases means iiNet does not profit from the service at its current scale but the economics might work in the ISP's favour should the service expand.

iiNet can subsidise the cost of the service by having the staff work in the call centre whenever they are not required on the road.

The ISP is also planning to launch the BoB Squad service for business customers in 2012, once its processes are bedded down.

No bricks and mortar

iiNet chief financial officer David Buckingham told customers at the open day that market growth for new DSL connections is saturated with providers now fighting to compete for each other's customer base.

"Telstra is spending a lot of money on retaining it's customer base," he noted.

"We are re-setting our goals," Buckingham said. "What we want to stand for is being a trusted partner for everything from devices and services. That inevitably means we need to be a better sales and service organisation. A 'trusted partner in the digital world'."

But iiNet will not be investing in bricks and mortar stores as both large competitors and smaller rivals - including budget telco Dodo - have indicated.

"Bricks and mortar retail? Not now. We can be profitable by selling each customer one more product. That's a simple add-on with low risk attached."