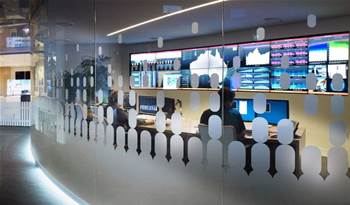 ISP iiNet has shifted its network operations centre to the ground floor of its Perth offices, making it visible from the street.

Managing director Michael Malone told iTnews that the NOC had previously been located "deep inside the office" on level three.

"If customers walked up [to level three] they could look around the corner and see it, but it was nowhere near our reception area — it was really only a staff resource," Malone said.

Malone said that the NOC had always been a "fishbowl" but previously had only "staff peering in".

Under the new arrangement, NOC staff will be visible even after hours when physical access to the corporate office is closed.

People coming into the office foyer will also be met with an array of monitoring screens that have been placed behind reception, showing network status, traffic volume and coverage maps.

"It means the operations team are now right next to the staff that are supporting our business customers, which i think will be handy," Malone said.

Part of the NOC's move is also about dressing up the ground floor of the iiNet offices to reflect the company's culture.

iiNet will this morning open an Experience Centre near reception, where customers can walk in and use iiNet products.

Malone said the "highlight" of the centre is a mock-up of a house — complete with a "white picket fence", fake grass, a lounge, kitchen, dining room and bedroom.

"All of the equipment is going to be set up in there, so you can walk in, sit down on the couch and try out fetchtv [for example]," he said.

"The whole purpose of the house is that these days the internet isn't a computer connected to a modem.

"People are using heaps of devices inside the home that are all net-connected, so we kind of wanted to have a place where you could see how all this stuff works together and what it does."

Members of iiNet's Bobsquad — field technicians that perform in-home setup for a fee — will also be based out of the Experience Centre when they are not performing customer jobs, enabling customers to walk in and seek assistance.

"I'd like to aspire to the idea that they're a bit like a Genius Bar, but I wouldn't want to draw that comparison too far," Malone said.