iiNet is 'over the hump' of Netflix slowdowns 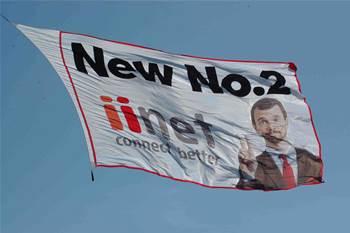 More network improvements to be rolled out by the end of August.

iiNet is now “over the hump” of the capacity issues it faced with the introduction of Netflix, with further network improvements to fix remaining issues to be rolled out over the next two months, according to chief technical officer Mark Dioguardi.

Dioguardi cited Netflix’s Australian ISP speed index figures as an example how much progress iiNet has made in resolving its capacity issues, especially given the company offers its customers unmetered use of the streaming video service.

“There’s been a significant reduction in the number of slowdowns compared to three months ago – we’re leaps and bounds ahead of where we were three months ago," he told iTnews.

“For the month of May, iiNet was the number two [in the Netflix ISP rankings] behind TPG. We were number three in April, so they’re good independent figures I can point to showing the improvement. We’re now doing better than Optus, Primus or Telstra.”

Dioguardi admitted the initial surge in Netflix use took the company by surprise. But he said the surge had ended and the ISP has rolled out improvements across its networks to handle the ongoing load.

“In April, the rate of growth for Netflix took us by surprise. It was 25 percent [then] and is now approaching 30 percent of our traffic,” Dioguardi said

“There’s no area of our network that remains untouched. There’s backhaul – most of ours is on dark fibre, and that’s highly scalable. There’s managed backhaul that we’ve worked on with providers such as NextGen, Optus and Telstra. And there’s our core metro network that we’ve continued to expand.”

Despite the additional backhaul iiNet rolled out, a faults advisory lists NBN services in a number of locations as still running at capacity at the time of writing. These include Coffs Harbour, Pinjarra, Toowoomba, Townsville, Aspley, Darwin, Bendigo and parts of Canberra.

The issues have ensured Netflix has remained the subject of a number of active threads on Whirlpool.

“In all honesty, we have DSLAMs in around 450 exchanges, and we’re down to a dozen that have issues – and I’m constantly on the phone to our backhaul providers to get those issues resolved faster,” Dioguardi said.

“There’s about a dozen left to do. We’ll roll out extra backhaul to half in July and half in August. As a percentage, it’s very small number, but there are always outliers.”

A spokesperson from the Telecommunications Industry Ombudsman told iTnews that while it didn't have enough data on streaming video-related slowdowns to call it a trend at this point, there have been a number of complaints about slower speeds since the Netflix launch.

According to the spokesperson, the complaints weren't limited to just iiNet or Netflix subscribers.

“Consumers of some service providers have complained to us that their internet has slowed down since around the time of the launch of Netflix and other new streaming services,” the spokesperson said.

“We are currently monitoring this issue, and are not at this stage able to comment on the facts behind these complaints. We will report on it should we identify any clear complaint trend.”