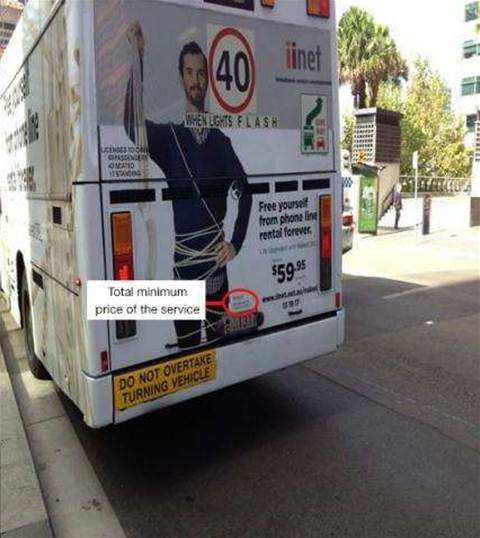 ISP iiNet has been fined $102,000 by the competition watchdog over an advertisement for its Naked DSL service.

The advertisement, which was displayed on buses in Sydney, caught the attention of  the Australian Competition and Consumer Commission (ACCC) as it did not display the "total minimum price of the service ... in a prominent way".

The total minimum price was displayed but in a far smaller font size than the monthly cost.

iiNet paid the fine, but according to the ACCC the payment is "not an admission of a contravention of the Australian Consumer Law".

iiNet Chief Regulatory Officer, Steve Dalby said the firm is "committed to meeting our obligations of compliance under the Australian Consumer law."

"When advised by the regulator that our interpretation of 'prominence' was not adequate, we immediately took steps to rectify the advertisement in question," he said.

"Although there are no specific guidelines in the law outlining what is adequate prominence, we have a comprehensive compliance program in place to help us meet this continuing challenge".