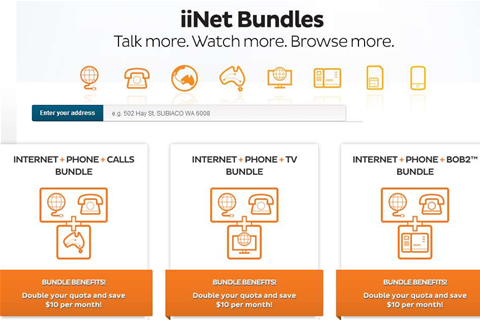 Internet service provider iiNet is chasing more than 8000 of its customers for outstanding payments after under-billing their accounts over a six month period.

The ISP blamed a “system issue” for incorrectly charging line rental for around 8035 customers from October 2013 to last month.

The glitch meant the customers - which iiNet said represented less than one percent of its user base - were not charged line rental fees. It quoted a customer base of 900,000 in its September 2013 annual report.

It declined to provide further detail on the technical cause of the error.

A spokesperson said customers would be rebilled an average of $30 per month for a period of between one to three months.

iiNet chief information officer Matthew Toohey said in a statement the ISP was currently contacting customers to apologise, and to issue invoices for accrued line rental, which would be limited at three months.

The Telecommunications Consumer Protection Code allows for charges to be collected up to 160 days (around five months) after they were incurred. Toohey said iiNet had chosen not to pursue the full billing amount.

It will offer extended payment options to undercharged customers.

iiNet has spent the past few years migrating a number of its subsidiaries on to its own billing platform, following several acquisitions including Westnet, Netspace, Grapevine, TransACT and AAPT.

iiNet spent several years considering whether to migrate the approximately 200,000 former AAPT broadband and phone customers off that company’s legacy Hyperbaric billing platform. It completed the process in October 2012.