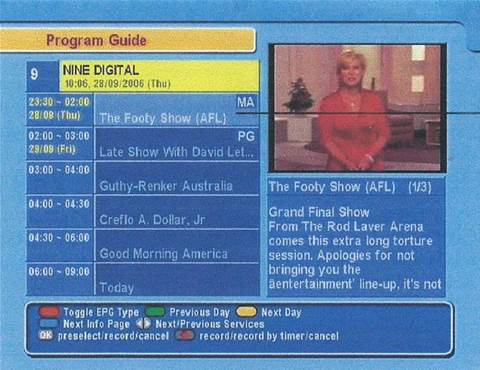 Electronic program guide (EPG) provider IceTV has won a three-year battle with the Nine Network over allegations of copyright infringement.

The High Court of Australia handed down its decision today, overturning what had been a successful appeal by Nine and reinstating an earlier favourable verdict.

"It is apparent that the primary judge reached the correct result and that this should not have been disturbed," the Court transcript said.

IceTV provides a subscription-based EPG for television known as the "IceGuide".

When downloaded onto certain devices, which are available for purchase by consumers in Australia, the IceGuide displays details of programs scheduled to be broadcast by free-to-air television stations for the coming six to eight days, including stations in the Nine Network, the transcript said.

Approximately two weeks prior to a program screening, an employee of Nine supplies certain third parties known as "aggregators" with a schedule of programs to be broadcast on Nine Network stations in that week.

Each weekly schedule is produced from a database owned by Nine.

Nine had alleged that IceTV had infringed copyright by reproducing a substantial part of the weekly schedule as part of its service. IceTV denied this, stating it compiled the information from multiple sources.

IceTV described today's win as being for its "many subscribers that enjoy the benefits of simpler, smarter TV viewing."

"IceTV has had one aim: To give our customers freedom of choice in everything they watch on their TV, to record what they want, skip what they want and watch it at a time that suits them," the company said in a statement.