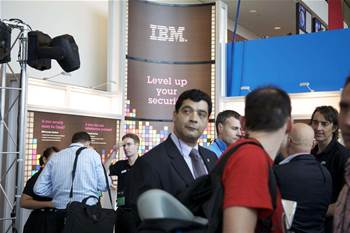 Delegates to AusCERT, Australia's premier information security event held this week on the Gold Coast, have taken home a little of the stuff they spent the week agonising over - a virus.

In an email this afternoon, IBM advised visitors to its AusCERT booth that its complimentary USB key was infected with a virus. An IBM spokesman and conference organisers confirmed the email was genuine.

It is the second time in two years that clumsy exhibitors have infected their customers with viruses.

"At the AusCERT conference this week, you may have collected a complimentary USB key from the IBM booth," IBM Australia chief technologist Glenn Wightwick wrote in an email to delegates this afternoon.

"Unfortunately we have discovered that some of these USB keys contained malware and we suspect that all USB keys may be affected."

Wightwick said the malware, which dated to 2008, was detected by most anti-virus products.

"The malware is known by a number of names and is contained in the setup.exe and autorun.ini files.

"It is spread when the infected USB device is inserted into a Microsoft Windows workstation or server whereby the setup.exe and autorun.ini files run automatically.

"Please do not use the USB key, and we ask that you return it to IBM."

IBM said in a statement that a "small number of IBM-branded USB sticks distributed to delegates at the recent AusCERT2010 conference were found to contain malware".

"IBM has immediately contacted delegates with remedial advice, and regrets any inconvenience that may have been caused," an IBM spokesman said.

To fix any damage that may be caused by using the USB key, IBM recommended:

"If you experience difficulties with the above steps, please contact the IBM Security Operations Team at secops@au1.ibm.com.  An IBM technical support person will contact you by phone to assist you.

"We regret any inconvenience that may have been caused."