IBM steps up to integrated stacks 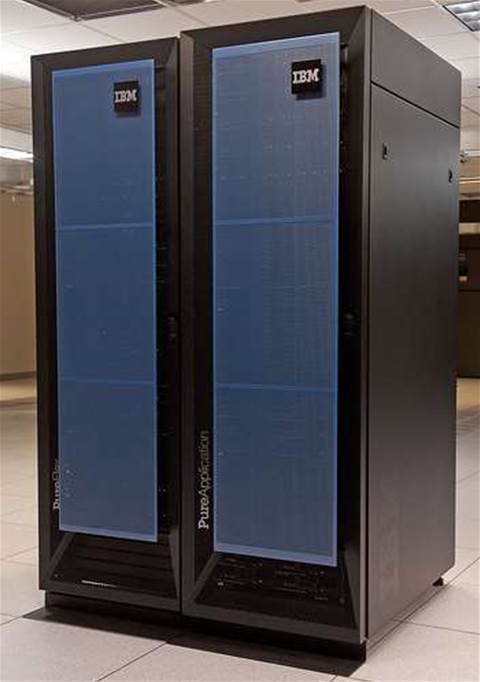 IBM has unveiled its PureSystems family of integrated hardware and software stacks optimised to run private cloud and enterprise applications.

General availability of PureFlex in Australia is expected in late May. Pure Application is expected to be available in July.

Australia and New Zealand manager for expert integrated systems, Alan Waite, told iTnews that PureSystems was about "more than just bundling some products together".

As an example, he said, one chassis could contain Power, System i and Intel-based servers, running various hypervisors but all managed from a single console.

"What we're doing is simplifying that infrastructure for a lot of organisations," he said.

Waite said that integrated stacks could make it quicker to deploy systems and applications and reduce the costs of managing and maintaining best-of-breed environments.

IBM would also offer 'patterns of expertise' that customers could use to simplify the rollout of third-party software apps by optimising them to run in PureSystems environments.

Among the 125 tools with patterns at launch are VMware's vSphere ESX 4.1 and Infor ERP.

Other patterns are aimed at making it easier for enterprises to switch workloads between hybrid public-private cloud environments, according to Waite.

"One of the ideas of patterns is we can take workloads off IBM SmartCloud - our public cloud offering - and put [them] on one of these PureSystems," he said.

"The patterns [used by SmartCloud and PureSystems] are the same, the formats are the same.

"It means, for example, you could start development on a public cloud which is up and running quickly and is fairly easy to do, and then when you're ready to deploy in-house you could install one of these PureSystems [to create an internal private cloud] and then move the workload onto [it]."

Oracle has its own vertically-integrated stacks of server, storage and networking gear optimised to run predominately Oracle software products.

"We're very flattered that IBM is about to announce engineered systems," Ellison said.

"[However], we think it will take a very long time to catch us. To catch us, IBM will have to re-engineer DB2, AIX and their hardware. It's a long process.

Ellison said Oracle had been working on integrated systems, where all components in the stack were optimised, for seven years.

By contrast, Waite said the PureSystem stacks were the result of four years' work and $2 billion investment in R&D and acquired technology by IBM.

But, he acknowledged, IBM's expertise on integrated systems went back to the mainframe days.

"It's nothing new," he said. "I started 20 odd years ago at IBM as an AS/400 engineer and that was an integrated system."

Waite said IBM wasn't interested in "narrowly integrated stacks" of appliances that "other vendors" were pushing as integrated systems.

IBM's desire to build an ecosystem of third-party software optimised to run on the PureSystems architecture appeared to set it apart from Oracle, whose focus is more on optimising hardware to run its own software products.

"We're not trying to be closed with these systems," Waite said.

"The whole idea of Flex is you can use a whole lot of processors, hypervisors and different software. It doesn't lock you in top-to-bottom with one vendor's stack."

IBM and Oracle broadly agree that integrated stacks will be - or sit behind - the next generation of computing.

Ellison pointed to the late Steve Jobs, a close friend of the Oracle chief, as an example of the benefits of an integrated stack for Apple's fortunes.

"He went back to Apple with a very simple idea. The problem is when you have company - Microsoft, another company - Intel, and another company - Hewlett-Packard, that are all trying to work together to deliver the PC. It's complicated," he said.

"There's lots of different people, lots of interests. It's hard to make a decision.

"He felt if one company could deliver the software, hardware and development online services, and the pieces fitted together, it would be better."

Ry Crozier travelled to Openworld Tokyo as a guest of Oracle.