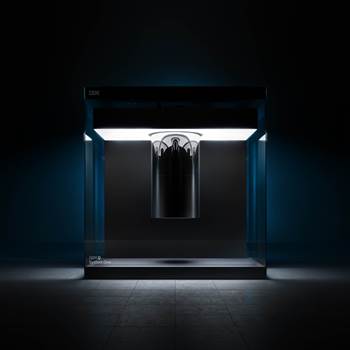 Engineers its first quantum system for commercial use.

IBM has progressed with its quantum computing initiative Q enough to produce a system capable of running outside a research lab, opening possibilities to rent access to it.

The vendor is one of several enterprise players to make announcements at this year’s Consumer Electronics Show (CES).

IBM used the show to unveil what it is calling IBM Q System One, a “universal approximate quantum computing system designed for scientific and commercial use.”

It plans to house an undisclosed number of these systems at an IBM Q Quantum Computation Center in Poughkeepsie, New York in 2019.

IBM said this would be the “first” centre, suggesting others could also be built. The purpose of the centre is to make IBM Q System One capacity available on a limited commercial basis.

That limit will be to “members of the IBM Q Network, a worldwide community of leading Fortune 500 companies, startups, academic institutions, and national research labs working with IBM to advance quantum computing and explore practical applications for business and science,” the vendor said.

"The IBM Q System One is a major step forward in the commercialisation of quantum computing," said Arvind Krishna, senior vice president of hybrid cloud and director of IBM Research.

"This new system is critical in expanding quantum computing beyond the walls of the research lab as we work to develop practical quantum applications for business and science."

IBM provided few actual details of the internals or power of the IBM Q System One.

It said that the design “includes a nine-foot-tall, nine-foot-wide case of half-inch thick borosilicate glass forming a sealed, airtight enclosure”.

The enclosure contained “thousands” of components, and was designed in such a way that it could also be opened up to perform upgrades or maintenance - something IBM saw as critical if the system was to be used commercially.

“A series of independent aluminum and steel frames unify, but also decouple the system's cryostat, control electronics, and exterior casing, helping to avoid potential vibration interference that leads to "phase jitter" and qubit decoherence,” it said.

“Protection from this interference is one of many reasons why quantum computers and their components require careful engineering and isolation.”

"We’re probably in a two- to five-year time frame that you’ll actually start to see commercial businesses doing real commercial applications … and then that means revenue [for IBM],” Rometty said.