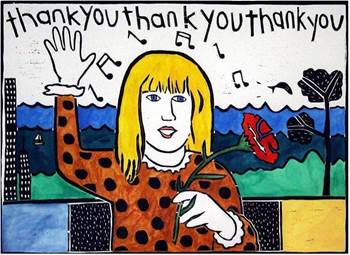 Australia may have just entered winter, but at the local headquarters if IBM there’s never a wrong season for a massive spring clean and Kondo cull to tell customers you're hip to the latest tech groove – and if that means massive open-plan workspaces, well, the walls just have to go.

But there’s a hitch, and it’s a big one: what do you do with an entire corporate campus worth of Australian artwork that’s been used to bring life – albeit quite non-confrontational life – to the meeting rooms and corridors of an otherwise soulless corporate park?

The short answer is you try to sell it, and sell it quick. Especially if you won’t be left holding a reasonably sized gallery’s worth of works and you're prepared to cop the price hit of a small deluge of works hitting the secondary art market.

In the case of IBM, fine art auctioneers Raffan Kellaher and Thomas have been hired to bring the hammer down on Big Blue's extensive catalogue of paintings, screen prints, lithographs, photographs and drawings that date back into the mid-1980s.

At 286 works (yes, we wondered about that very PC number too), the collection is also so big it’s been consigned to an online auction with bids closing at the end of this week.

In terms of what tickles IBM’s curatorial fancy, there are some broad rules most corporates stick to, namely the wholesale avoidance of anything unclad, political or too polarizing in terms of content, which means a lot of the stuff you’d see at the Sydney Biennale or MoMA wouldn’t make the cut.

What’s left instead is predominantly a raft of landscapes and pictures of places that span across Australia’s bush and cities, some abstract, most realistic.

We suspect IBM’s security ops team probably took possession of Trevor Weekes’ “The perfect Trojan Horse” printed off in 1985 as the second in a set of 25(below). 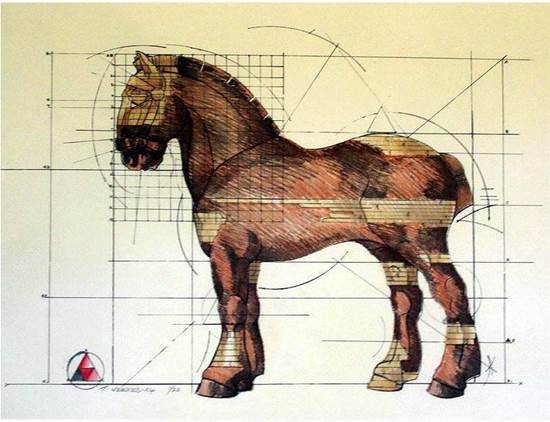 Another curiosity is which IBM business unit hung G. Dawon’s “Dog’s Life Just got Easier”, (below) a vibrantly coloured work with a happy looking hound salivating at a bone on a string about to be cut. 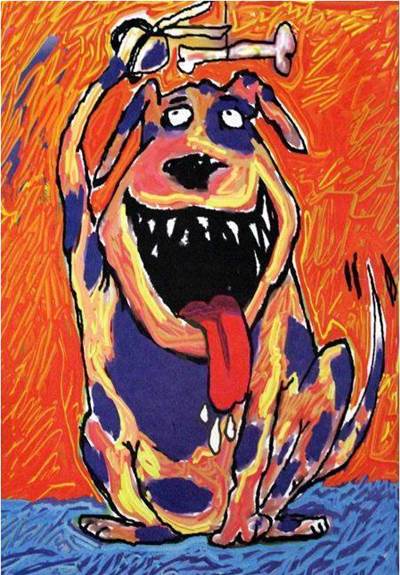 Anyone who’s a fan of vintage colour devices could get a bargain too, with an untitled “tektronix phaser print” measuring 76cm x 56cm by Sue Gollifer in the mix (below). 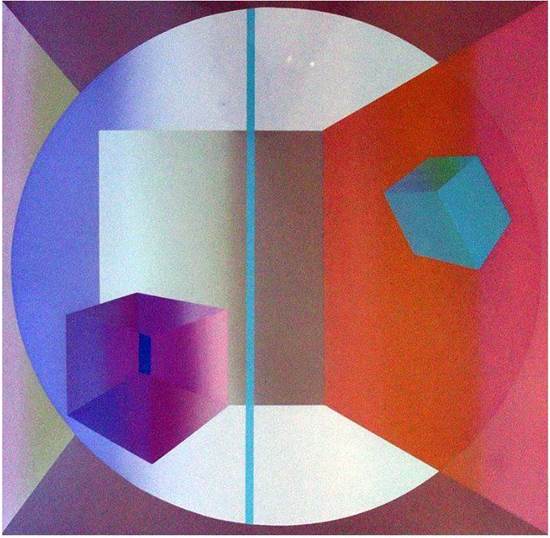 There is, of course, myriad local wildlife and critters in the frame, ranging from the ever-popular roos and parrots to a rather fetching up close portrait of an “Early Morning Emu” by Betinna McMahon (below), possibly a nod to the small emu population that still calls the Cumberland woodlands home. 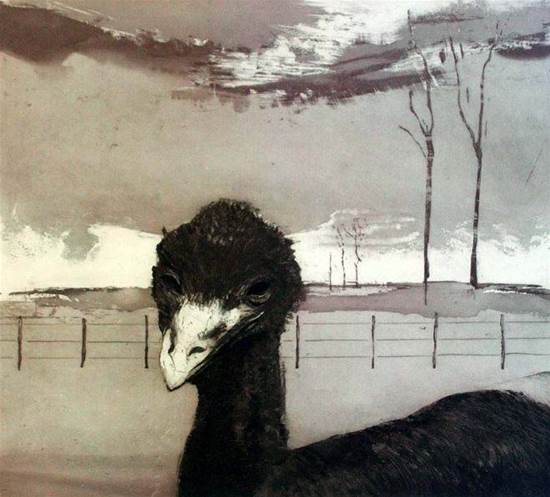 In terms of prices, IBM’s collection is – at least according to auctioneer’s estimates – definitely on the more affordable side ranging from as low as $20 through to the $2000-$3000 range.

That said, estimates can be notoriously unreliable with prices essentially dictated by the level of interest in a given item.

Given many of the suggested prices on the works being offered up – almost all the items appear unreserved – there's plenty to choose from for collectors looking to snap-up a steal.

It’s understood the primary purpose of the big sale is to find a loving home of the works rather than capitalise on any appreciation in value, assuming there is some.

It’s similarly understood the proceeds of the sale have been earmarked for a worthy charity yet to be selected, with IBM staff interest already believed to be strong.

It does all rather beg the question of what other little treasures could be wending their way out of corporate obscurity at IBM.

As visitors to IBM’s St Leonards HQ can attest, foyers and corridors are filled with glass cabinets filled with curious ranging from early punch cards through to memory and boards for the System/360 (we suspect they’re spares for Medicare).

Where all that stuff will go is still a bit of an open question, especially after the Australian Computer Museum put the call out for emergency accommodation for its collection.

As for the ‘does it spark joy’ question, we’ll say this much. While the Australian artists in IBM’s corporate collection may not be household names or command big number sums on the secondary market, at least Big Blue supported them.

That said we’ve asked for what the collection was valued at. If we find out, we'll let you know.