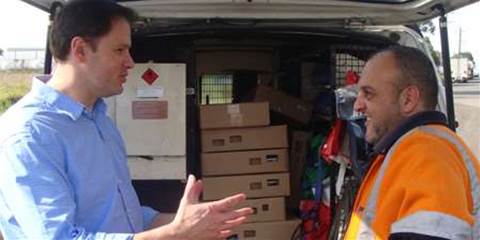 US vendors silent on inquiry.

Labor backbencher Ed Husic has launched his latest in a series of attacks on alleged price discrimination by IT vendors in Australia, resolving to improve "value for money" in government software procurement.

The Federal member for Chifley continued to rail against the price discrimination issue in a speech to Parliament Tuesday night, claiming Australian businesses and consumers were paying up to 80 percent more for software despite the relative strength of local currency in recent months.

"I want to keep the spotlight on and let the vendors know that if they think they can ignore the issue or ignore Government, well in fact Government has a very big interest in ensuring prices are fair," he told iTnews.

The Australian Government Information Management Office claims to have banked more than $60 million in savings from a Federal volume sourcing agreements with Microsoft -- one of several whole-of-government initiatives recommended by the 2008 Gershon Review.

Husic hoped to build on the Review's recommendations to apply more downward pressure on software pricing.

"While cost over-runs could be for a whole host of reasons, I think if there is a clear difference in price has been extended, then we want to know about it and if the prices aren't different, we want to why aren't they different to one sector but different for small businesses and consumers."

Since March, Husic has called on US vendors to reduce software and hardware pricing in the face of a stronger Australian dollar. His campaign included calls for meetings with Apple Australia managing director Tony King, which were eventually met.

Husic's campaign also garnered support from treasurer Wayne Swan and led to the inclusion of a probe into IT price discrimination in the Productivity Commission's recent retail industry inquiry.

The commission's final report has been submitted to the office of assistant treasurer Bill Shorten and a government response is expected in weeks.

Although the commission's conclusions are as yet unknown, its draft report in August appeared inconclusive on whether price discrimination was indeed occurring and if it should be stopped.

It was informed by a public submission by Maxwell International Australia managing director John Swainston, who pointed to the relative sizes of the Australian and US markets as a key reason for continued differences in pricing.

However, the commission maintained that should continued currency strength occur, "over time many retailers should be in a position to pass on exchange rate benefits to consumers as contracts with suppliers are renegotiated".

"Given that consumers are now able to bypass local suppliers and retailers by purchasing directly from overseas suppliers, retailers may also have the ability to take advantage of similar approaches or use alternate and less costly supply channels to reduce final prices for consumer," the report reads.

Public submissions for the inquiry opened in August but no comments were submitted by any of the US vendors that Husic has highlighted for failing to bring down pricing.

Despite a total 111 submissions since the report's release - a quarter of which Husic estimated related to the IT price discrimination issue - the only notable vendor to publicly comment is Google, which focused on the more contentious issue of removing a $1000 GST threshold for online purchases.

Husic called out other vendors, including Microsoft, Apple, Lenovo and Adobe for failing to comment on the issue.

Apple did not respond to questions at time of writing.

Husic said he would continue inquiries before the result of the commission's reports are released.

"Obviously I would be keen to see what the outcome [of the commission's report] but I want to go on the front foot... I'll be following up the issue of value for money for government," he said.