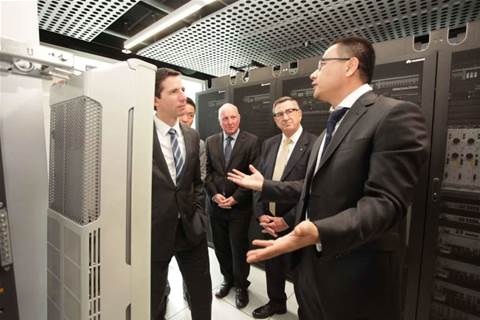 Chinese network giant Huawei has promised to provide free training to 100 Australian students annually inside its new $30 million Chatswood showcase facility, as part of a push to grow its Australian presence and win the trust of local business.

The student contingent will be run through a week-long crash course in the types of technologies being developed by Huawei, using 18 tonnes of network hardware that has been dedicated to the new testing and training facility.

In total Huawei expects 2000 people to use the facility every year once it is up and running, the bulk being employees and subcontractors of its major carrier clients Vodafone and Optus..

Lord said the opening was the latest step in Huawei’s effort to be seen as a global company instead of just a Chinese one.

“We have been in Australia 11 years now and of course we have our independent board here, so this is just another step towards Huawei being part of the Australian community," he said.

Huawei recently decided to export its unique Australian model of operation - overseen by an independent Australian board - to the UK, and has increased its Australian workforce by close to 20 percent, or 100 full-time staff, in recent times.

It is working to overcome a shaky relationship with the Australian market after it was banned from tendering for work on the build of the national broadband network in 2012.

Huawei already flies a smaller cohort of high-performing Australian students to Beijing and Shenzhen every year to see the heart of its technical operations and be exposed to Chinese culture and customs.

Half of the cohort to undergo the Australian training will be drawn out of the vocational training sector and local TAFEs.

“TAFE is an important source of staff for us and the subcontractors we work with …  the NSW system is delivering the quality - it is the quantity we are after,” Lord said.

“Australia needs to attract big companies like Huawei to set up theses training institutions and keep the brains here in Australia."