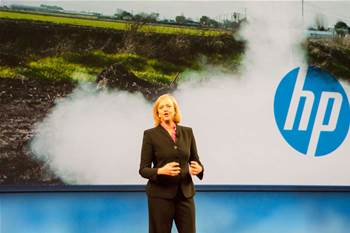 Steady as she goes for HP, Whitman says.

Won't become a software company after all.

It's back to basics for HP, which intends to rely on its broad product range of IT and networking equipment, new CEO Meg Whitman pronounced to 8000 attendees at the company's annual Discover conference in Las Vegas.

According to Whitman, infrastructure sales still earn the company the most money, bringing in some 70 percent of revenue.

"I won't move HP to become a software company," Whitman says. She added that the software part of HP is there to solve tough problems for customers.

Whitman says she isn't afraid of hardware commoditisation, believing HP can be different in the market with an emphasis on engineering.

Before being dismissed by the board, former CEO Leo Apotheker embarked on a strategy to turn HP into a software company at the expense of its hardware division.

In the CEO saddle since September last year, Whitman is in charge of a company that's struggling with falling sales and a share price that's down 42 percent in a year.

Despite this and the very public management scandal and upheaval that ended the reigns of her predecessors Leo Apotheker and Mark Hurd, Whitman says HP is "resilient" with "incredible depth and breadth".

The speech made no mention of the recently announced job cuts that will see HP reduce its workforce by eight percent, or 27,000 people.

Whitman's speech largely failed to fire up the 8,000-strong audience at Discover and it was left to the CEO of animation company and long-time HP partner DreamWorks, Jeffrey Katzenberg to deliver excitement – in a segment longer than Whitman's.

"This cartoon guy" as Katzenberg referred to himself as, pointed out that Whitman has reorganised HP into Cloud, Security and Information, and that this bodes well for the future as it aligns with current IT trends.

Saarinen attended Discover 2012 as a guest of HP.