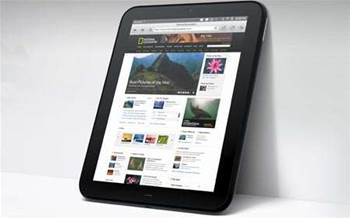 HP has revealed it will kill off its underperforming TouchPad and smartphone business as part of a wider business transformation.

The vendor said in financial results statements that it would "discontinue operations for the TouchPad and webOS phones".

"The devices have not met internal milestones and financial targets," the vendor said.

"HP will continue to explore options to optimise the value of webOS software going forward."

It was a dramatic reversal but one that had been on the cards after several months of poor device reviews, discounts and low sales.

A month later, the device did not fare well among major technology reviewers, who invariably described it as slow, "bulbous" and "no match for the iPad".

HP had started to discount the wi-fi versions within months of the devices going on sale.

US retail giant Best Buy was reported this week to be struggling to sell TouchPads.

Even so, a 4G version of the TouchPad had made an appearance and was thought to be in the works for a US launch this month.

HP CEO Leo Apotheker also revealed today that the vendor was exploring the separation of its personal computer business into a new company.

That could occur through a spin-off "or other transaction", he said.

"We believe exploring alternatives for [the business] could enhance its performance, allow it to more effectively compete and provide greater value for HP shareholders," Apotheker said.