HP 4G TouchPad debuts on Amazon at $US699 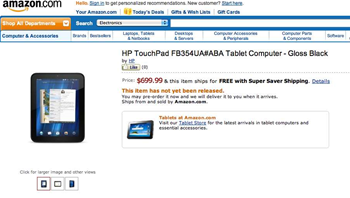 Weighs in $US30 under official iPad 2 pricing.

The device’s appearance on Amazon was ahead of its official US launch, which HP has previously suggested would be around August.

HP has yet to release official pricing for the TouchPad 4G, however in a bid to gain traction its WiFi-only 16 GB and 32 GB forerunners were heavily discounted from the original $US499 and $US599 asking price in the United States last weekend.

A slew of would-be rivals to Apple’s iPad have failed to shake consumers’ preference for the Apple device.

However there were expectations that Amazon’s forthcoming tablets may be contenders to change that.

Shortly after an HP executive had bragged the TouchPad would be "number one plus", the device copped an across-the-board beating by influential US technology reviewers.

While HP was tempting US customers with lower prices, Australians should not expect the same treatment at the August 15 Australian launch of its WiFi-only devices.

When the TouchPad 4G was shipped to Australia, HP would be contending with Apple's current Australian price for its 32 GB 3G and WiFi iPad of $AU839.