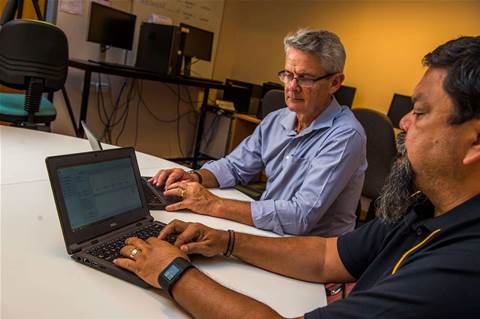 Reducing the risk of reoffending.

The University of Southern Queensland faced a unique problem: how to bring digital learning to prisoners not allowed to access the internet.

It has spent the last 25 years delivering higher education into correctional centres, usually as large blocks of printed text.

But the prohibition of internet access for prisoners meant they weren't being given the opportunity to develop the digital literacies needed for further education or work once they were released from prison.

USQ's Making the Connection project was developed to ensure that those in correctional centres were given the opportunity to acess higher education, despite their inability to go online. It received just under $5 million in funding from the federal government.

The university built an offline version of its learning management system - USQ OffLine StudyDesk - which can be installed on a server in a participating correctional centre's education network and accessed via the facility's desktop computers.

Since the platform launched, more than 18 correctional centres across Queensland, WA, NSW and Tasmania have signed up, and USQ is currently in talks with others in Victoria, NT, ACT and South Australia.

In the online version of the software, StudyDesk works with a learning objects repository (LOR) which holds course content - meaning when students access a resource, they are doing so through the LOR.

But the same approach is not feasible in offline mode.

The university therefore built a compiler to automatically harvest objects housed in the LOR and package the resources with a specific course.

A 'checker' function then goes through each course to make sure the files contained within are functional, and that online links have been removed.

Courses are then transferred to a correctional centre via physical DVD, or prison staff can download the courses via a virtal "kiosk" through their administration network onto external media,.

They then upload it to their isolated education network for students to access on desktops.

The university is planning to soon offer laptops to students to remove the need to visit a static desktop.

"To help overcome these difficulties in access, the Making the Connection project will be providing notebook computers to participating students so that they can take them back to their cells and continue working in their personal time."

Students have the option of studying courses like diplomas of arts, business administration and science; as well as a tertiary preparation program and a higher education pathways program for Indigenous students.

Nationally, there are 111 correctional facilities with a prisoner population of over 36,000.

USQ is hoping the project will also result in a reduction in the recidivism of inmates.

It is yet to collect hard data to measure the success of the program given its infancy, but is motivated by wider studies showing prisoners with higher educational levels are 40 percent less likely to reoffend.

It is collecting data on student numbers, retention rates and academic results, alongside qualitative data to ensure the courses are aligned to jurisdictional needs, and is conducting focus groups with students at the beginning and end of every semester.

"It is theorised that improvements in cognitive processing, communication abilities and enhancement of long term prospects afforded by education and training for prisoners, results in prosocial behaviours with a subsequent reduction in the frequency and severity of antisocial behaviours," Udas said.

"In the longer term, funding is likely to be returned to the public purse through taxes collected from ex-prisoners employed upon release from custody, decreased costs of health care as better educated people have improved health outcomes, the reduced cost of crime and decreased access to welfare by ex-prisoners."

Udas and USQ are finalists in the Education category of the iTnews Benchmark Awards. The winners will be announced at a gala dinner at Melbourne's Grand Hyatt on February 17.