How Qld Uni removed the IT headache for genome scientists 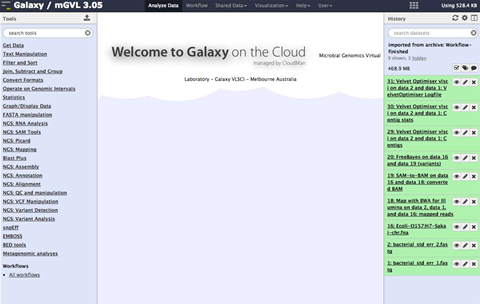 Inside the Genomics Virtual Laboratory.

It's a highly important area of research - scientists analyse genomes (the entire DNA content with a cell) to help them understand disease.

So it goes without saying that to undertake genomics research, these scientists need significant computational and storage resources.

However, such tools and platforms can be complicated to set up and often require customisation, not to mention a high level of ongoing maintenance.

The University of Queensland sought to remove this technology headache for researchers through its Genomics Virtual Laboratory - a pre-packaged compute cluster that scientists can pick up for free.

"Many of the tools supported by the GVL were already being used by the researchers, but in a more complicated or less capable platform."

It means scientists can spend less time dealing with the technology underpinning their research efforts and more time improving their understanding of disease.

Queensland Uni has reported rapid take-up of the service since it launched, with genomics and bioinformatics researchers not just across Australia but in other parts of the world using the platform.

The university says thousands of jobs have been executed, hundreds of instances have been launched, and more than 100TB of data has been stored on the Galaxy managed service component of the platform.

Abramson and the University of Queensland are finalists in the Education category of the iTnews Benchmark Awards. The winners will be announced at a gala dinner at Melbourne's Grand Hyatt on February 17.