How litigation only spurred on P2P file sharing 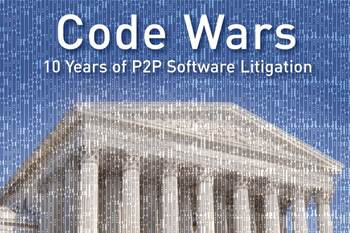 Analysis: Did the content industry lose the legal battle?

Do you remember back in 2001 when Napster shut down its servers? US courts found Napster Inc was likely to be liable for the copyright infringements of its users. Many of Napster's successors were also shut down.

Aimster and its controversial CEO were forced into bankruptcy, the highest court in the US strongly suggested that those behind Grokster and Morpheus ought to be held liable for "inducing" their users to infringe, and Kazaa's owners were held liable for authorisation by our own Federal Court. Countless others fled the market in the wake of these decisions with some, like the formerly defiant owners of Bearshare and eDonkey, paying big settlements on the way out.

By most measures, this sounds like an emphatic victory for content owners. But a funny thing happened in the wake of all of these injunctions, shutdowns and settlements: the number of P2P file sharing apps available in the market exploded.

By 2007, two years after the US Supreme Court decided Grokster, there were more individual P2P applications available than there had ever been before. The average number of users sharing files on file sharing networks at any one time was nudging ten million and it was estimated that P2P traffic had grown to comprise up to 90 percent of global internet traffic. At that point content owners tacitly admitted defeat, largely abandoning their long-time strategy of suing key P2P software providers and diverting enforcement resources to alternatives like graduated response or "three strikes" laws.

Why is it that, despite being ultimately successful in holding individual P2P software providers liable for their users' infringement, content owners' litigation strategy has failed to bring about any meaningful reduction in the amount of P2P development and infringement?

I would argue pre-P2P era law was based on a number of "physical world" assumptions. That makes sense, since it evolved almost exclusively with reference to physical world scenarios and technologies. However, as it turns out, there is often a gap between those assumptions and the realities of P2P software development.

Four such physical world assumptions are particularly notable in explaining this phenomenon.

The first is that everybody is bound by physical world rules. Assuming this rule had universal application, various secondary liability principles evolved to make knowledge and control pre-requisites to liability. But software has no such constraint. Programmers can write software that will do things that are simply not possible or feasible in the physical world. So once the Napster litigation made P2P programmers aware of the rules about knowledge and control, they simply coded Napster's successors to eliminate them – something no provider of a physical world distribution technology ever managed to do.

In response, the US Supreme Court in Grokster created a brand new legal doctrine, called inducement, that did not rely on either knowledge or control. That rule was aimed at capturing "bad actors" - those P2P providers who aimed to profit from their users' infringement and whose nefarious intent was demonstrated by "smoking guns" in their marketing and other communications. But the inducement law failed to appreciate some of the other differences that make the software world special and thus led directly to the explosion in the number of P2P technologies. In understanding why, three other physical world assumptions come into play.

One is that it is expensive to create distribution technologies that are capable of vast amounts of infringement. Of course in the physical world, the creation of such technologies, like printing presses, photocopiers, and VCRs required large investment. Research and development, mass-manufacturing, marketing and delivery all require massive amounts of cash. Thus, the law came to assume that the creation of such technologies was expensive.

That led directly to the next assumption – that distribution technologies are developed for profit. After all, nobody would be investing those massive sums without some prospect of a return.

Finally comes the fourth assumption: that rational developers of distribution technologies won't share their secrets with consumers or competitors. Since they needed to recoup those massive investments, they had no interest at all in giving them away.

All of these assumptions certainly can hold up in the software development context. For example, those behind Kazaa spent a lot on its development, squeezed out the maximum possible profit and kept its source code a closely guarded secret. By creating a law that focused on profits, business models and marketing, the Supreme Court succeeded in shaking out Kazaa and its ilk from the market.

But the Court failed to appreciate that none of these things are actually necessary to the creation of P2P file sharing software. It can be so inexpensive to develop that some university programming courses actually require students to make an app as part of an assignment. When the software provider puts in such a small investment, there's much less need to realise a profit. This, combined with widespread norms within the software development community encouraging sharing and collaboration, also leads to some individuals making the source code of their software publicly available for others to adapt and copy.

When the US Supreme Court created its new law holding P2P providers liable where they "fostered" third party infringement, as evidenced by such things as business models, marketing and internal communications, the result was an enormous number of programmers choosing to create new applications without any of those liability attracting elements. In the absence of any evidence that they had set out to foster infringement, they could not be liable for inducement, and having coded out of knowledge and control they could not be held liable under the pre-P2P law either.

The end result? The mismatch between the law's physical world assumptions and the realities of the software world meant that the law created to respond to the challenges of P2P file sharing led to the opposite of the desired result: a massive increase in the availability of P2P file sharing software. The failure of the law to recognise the unique characteristics of software and software development meant the abandonment of the litigation campaign against P2P providers was only a matter of time.

Dr Rebecca Giblin is a member of Monash University's law faculty in Melbourne. Her new book Code Wars tells the story of the decade-long struggle between content owners and P2P software providers, tracing the development of the fledgling technologies, the attempts to crush them through litigation and legislation, and the remarkable ways in which they evolved as their programmers sought ever more ingenious means to remain one step ahead of the law. The book explains why the litigation strategy against P2P providers was ultimately unsuccessful in bringing about any meaningful reduction in the amount of P2P development of infringement.

Visit codewarsbook.com where you can read the first chapter in full. Physical copies can be ordered online from stores like Amazon and Book Depository, and electronic copies are available via Google books at a heavily discounted price.