How Kogan spun up Dick Smith online in one month 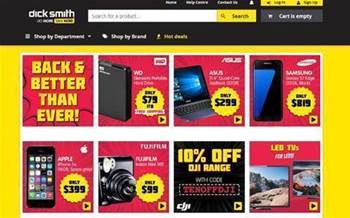 Build-over-buy approach proves its worth.

When Kogan's management snapped up the Dick Smith online business on April 1 this year, the retailer's tech team was given just one directive: launch a full ecommerce operation from scratch in two months.

Dick Smith had gone into voluntary administration in early January. Kogan swooped in mid-March to snap up its intellectual property assets with the intention of running the Dick Smith brand as an online-only business alongside kogan.com, and the deal went through on the first day of April.

The retailer scheduled a relaunch date for the failed business on June 1, just two months after the acquistion.

The purchase didn't come with any infrastructure, meaning Kogan's IT team had to build the new ecommerce operation from scratch.

The online retailer has shifted to a build-over-buy mentality as its business has grown: the core Kogan platform is mostly homegrown (web, marketing channels, supplier marketplace, and algorithmic prediction engine), while it uses a "heavily customised and automated" version of SAP for ERP.

So the IT team decided to develop new code that extended the core proprietary Kogan ecommerce platforms and microservices to other brands, and utilised the auto-scale properties of its existing cloud infrastructure.

He said he was keen to avoid purchasing an off-the-shelf ecommerce platform and configuring it due to the "higher costs, duplication and effort" involved, despite the arguably lower risk.

Leveraging Kogan's existing approach to in-house platform development would allow the business to reach its goal without much increase in operational costs, Stefkovski said.

This approach proved its worth when Stefkovski's team revealed they were ready to set the platform live at the start of May - a whole month ahead of schedule.

The jump on the start date brought in an extra $3 million in revenue from sales on the new Dick Smith platform. The brand is now generating around that figure each month.

Using its existing expertise and code base - as well as agile software development - meant the Kogan IT team was able to create the new-look Dick Smith without any additional hires or consultants, while running the normal business at the same time.

The company also claims to have saved at least $50,000 each month by putting Dick Smith on Kogan's cloud infrastructure, rather than launching new instances.

This project has been named a finalist in the consumer category of the iTnews Benchmark Awards 2017. View the full list of finalists here.