Homeland Security to scan fingerprints of travellers exiting the US 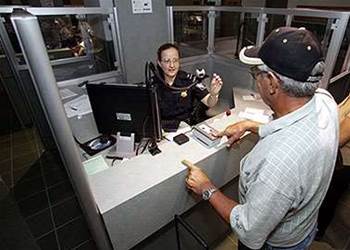 The US Department of Homeland Security is set to kickstart a controversial new pilot to scan the fingerprints of travellers departing the United States.

Biometric technology such as fingerprint scans has been used by US Customs and Border Patrol for several years to gain a biometric record of non-US citizens entering the United States.

But under the Bush Administration, a plan was formulated to also scan outgoing passengers.

Michael Hardin, a senior policy analyst with the US-Visit Program at the United States Department of Homeland Security told a Biometrics Institute conference today that the DHS will use the data from the trial to "inform us as to where to take [exit screening] next."

"We are trying to ensure we know more about who came and who left," he said. "We have a large population of illegal immigrants in the United States - we want to make sure the person getting on the plane really is the person the records show to be leaving."

The original exit scanning legislation planned by the Bush administration stipulated that airlines would be responsible for conducting the exit fingerprints.

But after much protest, Hardin said the new Obama administration re-considered this legislation two weeks ago and is "not as sold that private sector should be agency for exit fingerprints."

"The new administration feels that perhaps it is more appropriate that Government should take that role."

The exit fingerprint scanning is one of several fronts in which the DHS is using biometric technology to secure its borders.

Every day, the US-VISIT scheme uses fingerprint scans to enrol or verify the identity of 86,400 visitors to the United States.

These scans are conducted on a purpose-built, cube-shaped fingerprint scanner.

"We specified to vendors, it had to be no more than 6 x 6 x 6 inches - it had to fit on counter and light enough to walk around with," Hardin said. "We also told them the reader light had to be green - people tend to think red is hot to touch."

The DHS is testing whether it can adapt the same biometric technology to enrol or veify identities from remote locations using wireless connectivity.

Hardin said the DHS is seeking an identity verification system for the US Coast Guard, which tends to operate in a difficult environmental conditions.

"We'll do this the way we did the Cube at customs - we will go to the industry with some specifications and say, if you build it we'll buy it."

The DHS is also set to go-live with a trial of RF-enabled biometric identity cards on June 1, aimed at securing the border between the United States and Canada.

U.S. and Canadian citizens will be authenticated to travel between the two countries using identity cards fitted with radio-frequency embedded chips.

Hardin said Americans and Canadians have traditionally been able to travel between the two nations with little fuss.

But since the September 11 attacks on New York and Washington, the DHS has insisted on the use of a passport, passport card, drivers license or some other form of documentation approved by U.S. States or Canadian provinces to verify identity.

As of June 1, travellers crossing the border will be asked to carry an RF-enabled card which transmits a passport photo image and information about the traveller to border control staff systems, who can then check that photograph against the physical appearance of the traveller or their vehicle.

Editors Note - This story originally contained a representation that the biometrics trial in Atlanta and Detroit included the fingerprint scanning of US citizens. This has since been proved to be incorrect and the story has been modified - only non-US citizens will be expected to provide a biometric record.