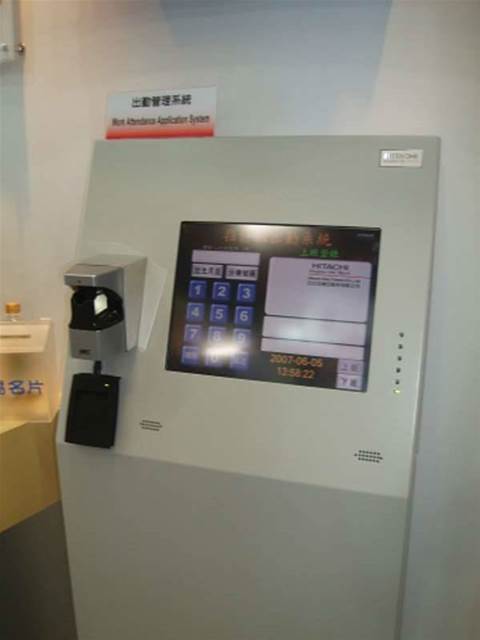 Hitachi Australia is unfazed by slow local uptake and the emergence of a competitor as it seeks to further roll out vein-scanning technology in the competitive field of biometric security.

Hitachi Australia is unfazed by slow local uptake and the emergence of a competitor as it seeks to further roll out vein-scanning technology in the competitive field of biometric security.

With vein-scanning accounting for roughly 80 percent of biometric security used in the Japanese banking sector, the company has yet to replicate this success in Australia and New Zealand. De Leon says that company has "touched base" with a series of local banks, including Westpac, over the last 18 months.

However, despite the lack of success beyond Japanese shores thus far, De Leon says that Hitachi has only just started to expand its global efforts.

"We're trying to create an awareness in Australia, New Zealand, Europe and the US, and our aim is to create some critical mass," said De Leon.

The technology's applications in Australia have focused on access control but there have also been applications in the retail and hospitality sectors in time and attendance management.

De Leon sees the potential for "anything with a latch or a door" to find use for the technology, with car immobilisation one example touted.

De Leon is most hopeful about the technology being applied by governments in highly secured areas, citing prisons and the iris scan technology used in methadone programs as potential areas for deployment.

He also claimed that the technology was successfully trialled with the use of surgical gloves, expanding its range of potential applications into the medical and scientific fields.

De Leon sees vein-scanning as far superior to fingerprint-scanning, which he describes as having "under-performed on accuracy." He points out that whilst there is potential for fingerprints to be copied, "a vein is something that lives inside your skin."

Vein-scanning is also a non-contact technology, meaning there is less potential for the scan to be affected by any superficial damage or problems with the finger.

"There are issues with fingerprints like dirty fingers that can cause problems with authentication," said De Leon. "There's also the very common problem of sweaty fingers."

"With iris-recognition, you always have to focus your eyes to look into the scanner, so there is a focal alignment issue from a speed perspective. So if you have a lot of people waiting in line it can cause delays."

Industry rival Sony recently announced the development of their own vein-scanning technology called Mofiria, though Hitachi says it is unconcerned, with De Leon pointing out that Sony is still yet to release a device.

De Leon also welcomed the competition, saying that "it's always good for the consumer to have more options, especially as it means the product becomes more widely available."