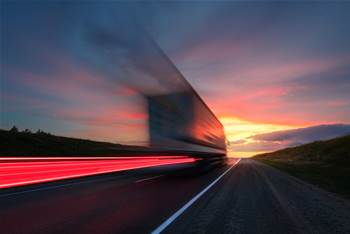 Built in Azure on Databricks’ Lakehouse, the platform is helping the NHVR deliver driver safety and productivity improvements in the heavy vehicle industry using evidence-based regulation.

“We ingest an enormous amount of data in any one year,” NHVR chief data and technology officer Cameron Stone told iTnews.

“In fact, with all the cameras around the country, we bring in about 4.5 million heavy vehicle camera sightings per month.”

Stone said the investment over the past 12-18 months have been “quite deliberate”, with the NHVR’s traditional business intelligence warehouse not cutting it for “real-time, high-speed” data.

Using the Databricks platform, the NVHR has built a number of models in-house, including a fatigue engine that it uses to identity and target drivers most at risk of causing fatigue-related accidents.

According to the National Transport Insurance and National Truck Accident Research Centre, fatigue is the leading cause of heavy vehicle driver fatalities, accounting for 60 percent of all deaths in 2020.

From the engine, the NVHR produces a “output list” of vehicles that are believed to have high-risk fatigue that is delivered to officers in real-time for “targeted interventions”.

“When we were targeting using the risk engine, we did identify more of those high-risk extreme fatigue breaches, so they would have been issued with a range of fines,” Wigg said.

She estimates the engine has led to a “four percent increase in yielding high-risk fatigue infringements”, which will continue to change as refinements are made.

It has used the platform to identity a cohort of 197 extreme risk vehicles and operators that had a one in 38 chance of being involved in a fatal or serious incident.

Wigg said the engines that have been developed on the platform had enabled the regulator to become “smarter” about how it uses its limited resources.

“We’ve got 980,000-odd registered vehicles, and we can’t intercept every single one of them every day of the week, so we have to be smarter about how we do that,” she said.

Stone said productivity improvements were occurring at a time when the NHVR is taking on more work, with responsibility for the regulation of heavy vehicles in NSW to transition in August.

“Data is just fundamental ... to understand the industry we’re regulating,” he added.

“In a perfect world, we want to understand who’s doing the right thing out there, and for the people that are we want to be on our game so much so that we leave them to go about their business.

“For those who aren’t, we want to help work with them and intervene as necessary to get those unsafe practices off the road.”