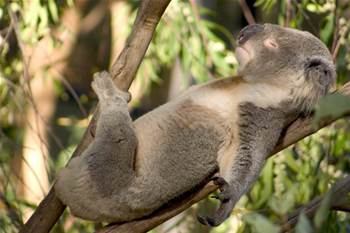 A new study from the Queensland University of Technology outlines how researchers are plugging infrared footage from a drone-mounted camera into an algorithm to spot koalas hiding in the treetops.

Conservationists and wildlife researchers are no strangers to using drones to study and survey animal populations, but as co-author to the study Dr Grant Hamilton said, “a seal on a beach is a very different thing to a koala in a tree”.

Not only do koalas live in diverse habitats and terrains across Australia, but matters are further complicated by the fact they might be way up in the tree canopy or on private property.

The paper published in Nature outlines how in a survey done in southest Queensland, humans with koala-spotting experience only sighted around 70 percent of GPS-tagged koalas in an area.

Non-expert observers only found 23 percent of koalas present in the area.

And despite the increased popularity of drone-based aerial surveys in reducing accessibility issues, processing images collected by them has been a tedious and time-consuming task that was subject to bias from interpreters.

“Automated detection of individual animals in remotely sensed imagery can reduce bias and increase accuracy and precision of wildlife surveys, but few methods have been developed and tested in the field,” the researchers said in the paper.

However, combining the drones and algorithms with thermal imaging has proven to be a winning ticket for spotting the warm-blooded, four-thumbed creatures.

To maximise the chances of success in an early trial, the IR-equipped drone was deployed early in the morning during colder months where the koalas’ body temperature would stand out more against background temperatures.

After scanning the area in a “lawnmower” pattern, taking hours to cover terrain that would’ve taken a whole day for a human on foot, the data was then fed into the algorithm where koalas were correctly identified 86 percent of the time.

“That’s a substantial increase in accuracy that we need to help protect threatened species,” Hamilton said.

“What we previously found was the accuracy was about the same as expert observers. Now we actually know that it's better.”

However, Hamilton cautioned that despite the time and cost reductions, drones aren’t a silver bullet solution that will entirely replace humans and even sniffer dogs in monitoring threatened animal species.

A threatened koala population near Port Stephens in New South Wales, for instance, couldn’t be monitored with drones due to exclusion zones surrounding the nearby Williamtown airport and Royal Australian Air Force base.

“There are advantages and downsides to each one of these techniques, and we need to figure out the best way to put them all together. What we do know now is that this is a really powerful tool within the toolbox.”

Further trials with the technology are slated to explore whether the system could be adapted to detect invasive or feral species such as deer. QUT has already released killer autonomous drones onto the Great Barrier Reef to hunt down crown of thorns starfish.