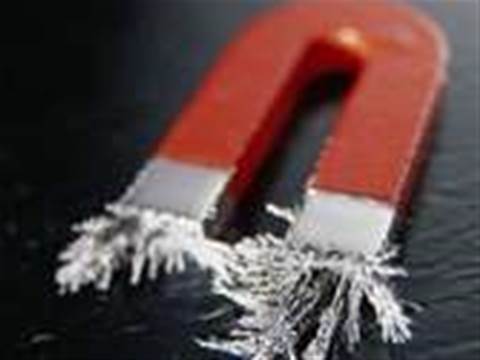 The research by Joshua Deutsch, professor of physics at the University of California, Santa Cruz, and Andreas Berger, formerly at Hitachi Global Storage Technologies, appeared in the July 13 online edition of Physical Review Letters.

The scientists said that the knowledge may help engineers design more reliable materials for disk drives.

They explain that, for each bit, a magnetic head grazes a tiny patch of a disk drive, forcing its polarity to align up or down to represent the magnetic equivalent of a one or a zero.

The patch's polarity in many magnetic materials changes in a haphazard series of large and small jumps that physicists liken to an avalanche, although Deutsch's research shows that it often behaves more like an explosion or runaway fire.

"The big advance in this paper is that in previous models of avalanches, the spin just flips from up to down as soon as they apply a magnetic field, and they're done. But that's not the way spin behaves in the real world," Deutsch said.

Instead Deutsch and Berger envisioned an individual bit of information as a tiny pincushion bristling with individual magnetic fields.

As the disk drive head nears, each pin tends to wobble in a widening circle - pointing neither up nor down but somewhere in between - before it settles on its new polarity.

This wobbling is called 'precession' and resembles the way that a spinning top draws out circles as it rotates.

"There's a lot of stored energy in a magnet. It's sort of a battery in a way, " Deutsch said. "As each spin flips from up to down, it liberates a small amount of energy that can do more work."

He explained that these combined effects can add up to a wave of energy that topples adjacent pins and spreads across the magnet's surface.

Deutsch and Berger suggested that one of the reasons that avalanches die down is because the magnetic material has an inherent ability to damp out the spin precession.

The damping comes from the way the spins interact with their non-magnetic surroundings, including electrons and minute vibrations called phonons.

Materials with poor damping are susceptible to long-running avalanches, and those with higher damping would be better candidates for use in disk drives.

But all real materials feature much lower damping than the infinite damping assumed in previous models, Deutsch said.

"Obviously, disk drive makers have already learned by an enormous amount of ingenuity and trial and error what materials make good disks," he added.

"But now we understand a lot better one of the reasons why - because the materials are good at damping - and we can quantify how damping will stop runaway avalanches. We still can't calculate their damping, but at least we can measure it."

Got a news tip for our journalists? Share it with us anonymously here.
Copyright ©v3.co.uk
Tags:
avalanche down drive failures hard hardware magnetic to