Hands on: Configuring an iPad fleet 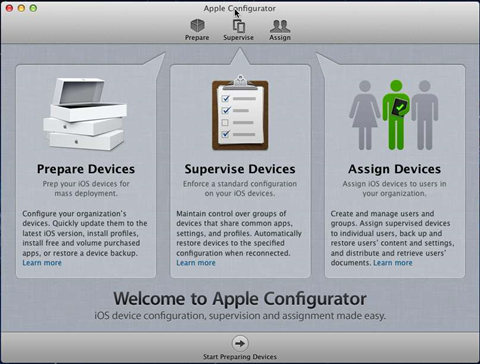 The iPad is finding its way into businesses and schools. But how does the IT department deploy hundreds of devices that don't work with traditional enterprise tools?

Apple's attempt at its own answer is the 'Configurator' tool, which quietly slipped out during all the hoopla of the latest iPad and Apple TV releases. It provides a simple interface for profile creation and deployment and makes it a little easier to set up a fleet of iPads.

Apple has of late provided enterprise deployment resources that support over-the-air profile delivery so that email, network configuration and device security are covered. However, application deployment has until now required other solutions such as the Casper Suite. This Configurator tool could more or less negate the need for these third party tools, once Apple gets its act together on introducing volume licensing to the Australian market.

The Configurator requires a Mac running OS X 10.7.2 and iTunes 10.6 or better. Any apps you plan to install will need to be added to that machine's iTunes library. There is no need for a server.

Devices are managed through a three-stage lifecycle; Prepare, Supervise and Assign.

Apple offers its customers in the United States a Volume Purchasing Program that allows companies to purchase iOS app licenses in bulk. However, Apple has not yet made that program available in Australia and, according to an Apple spokesperson, there's no word on when or of it will. Australian users will have to install any paid apps themselves using the App Store.

But the tool is nonetheless useful. Rather than set the WiFi, Exchange, VPN and other settings manually, the Apple Configurator provides a GUI for creating profiles that set almost every option available under iOS's Settings. Settings can also be locked down so that users can't alter anything that will make the device less secure or usable.

Once a profile is created it can be applied to up to 30 devices at one time. These must be connected by USB as the tool doesn't support over-the-air configuration.

The Apple Configurator also makes it possible to assign specific devices to individuals to aid tracking. This is handy if you deploy iPads as shared devices. When a device is assigned to an individual, it can be preloaded with specific applications and documents. For example, if you hand out iPads to field staff, you can create a user profile that includes specific task-related apps and documents. When the device is checked out to that individual, their specific apps and data are copied to the device.

But it is a little buggy...

The tool works reasonably well but we did encounter some issues. In particular, if the build of an iOS device failed for some reason, pressing the "Stop" button  halted the process but wouldn't let us restart until we closed the application and restarted. Clearly, there are some version one gremlins to be sorted.

If you can live with its limitations, the Apple Configurator is a viable option to other Mobile Device Management tools.

However, as it is limited to USB-based configuration and requires an Apple computer to use, larger organisations might prefer alternatives such as Mobile Iron and Airwatch.

It's also worth keeping an eye on whether Cisco Systems chooses to lock horns with Apple over the IOS name. Cisco's routers and switches run an operating system called  IOS (Internetwork Operating System) and the company also offers tools named "configurators". Curious.