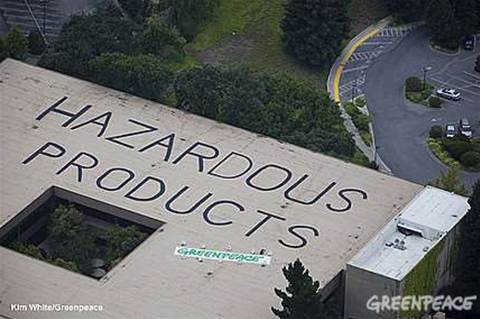 Environmental activist organisation Greenpeace has made IT giant Hewlett Packard its latest target.

The group on Tuesday staged a protest on HP's Silicon Valley office, climbing to the roof of company headquarters and painting the words "Hazardous Products" in giant letters.

Greenpeace said that the protest was retaliation for what the group sees as a broken promise by HP.

The group alleged HP had promised to remove toxic materials such as PVC plastics and brominated flame retardants from their products.

Elimination of both materials has been a major component of Greenpeace's consumer electronics campaigns and has become central to the environmental programmes for major PC makers.

"Instead of making progress on phasing out toxic chemicals from their products, HP continues making excuses," said Greenpeace.

"They are backtracking on their commitment to eliminate PVC plastic and BFRs from their products by the end of 2009."

An HP spokesperson told v3.co.uk that the company was preparing to release products free of both PVC and BFR materials later this year and plans to eliminate both materials completely by the end of 2010.

"The unconstructive antics at HP's headquarters today did nothing to advance the goals that all who care about the environment share," the spokesperson said.

"HP will continue its efforts to develop new products and programs around the globe that help the company, its business partners and customers conserve energy, reduce materials use and reduce waste through responsible reuse and recycling."

This is not the first run-in Greenpeace has had with a major IT firm. For several years the group has been publicly prodding Apple over its environmental policies.

The group also maintains a Green Technology index which grades and ranks PC and mobile phone makers on both the use of toxic materials and hardware recycling policies.

Got a news tip for our journalists? Share it with us anonymously here.
Copyright ©v3.co.uk
Tags:
both group hardware hp materials oddware products toxic