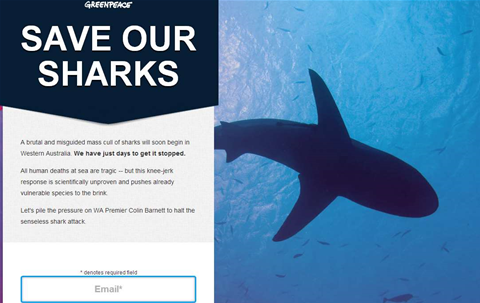 But it says shoddy infrastructure is at fault.

Western Australia’s Department of Premier and Cabinet has traded recriminations with Greenpeace over an email campaign which the former claims overwhelmed its email server during a critical bushfire period.

Greenpeace Australia has been corralling opposition to WA’s controversial shark cull policy by encouraging supporters to email the state’s Premier Colin Barnett through his public inbox.

The environmental lobby group set up a pre-prepared message to the Premier’s department, which is “a pretty standard setup” for these sorts of campaigns, it said.

In response, supporters sent more than 16,000 messages over a period of two days, pushing the total received by the inbox to 24,000 over this same period.

According to a spokeswoman for the department, the email traffic overwhelmed the email server just as the DPC was trying to coordinate resources in response to Perth Hills bushfires which claimed 44 homes and one life.

“For a few hours at the weekend and on Monday this volume of email traffic did compromise the DPC email system and it did have an adverse impact on the Department’s ability to communicate during the recent bushfires with the potential to affect its role in assisting DFES and other agencies in the response to those fires,” she said.

She added that the emails were treated as spam by the DPC systems.

But Greenpeace has hit back at the government, arguing that the public face of the WA government ought to have the IT infrastructure in place to meet its obligations to the public.

Your say: Should a reasonable mail server be able to cope with 24,000 emails?

@iTnews_au it would have to be pretty underpowered as it's only 8.3 emails a second. Perhaps an old server? With malware scanning?

@iTnews_au One every just over 3 seconds... Shouldn't be that difficult, assuming the bandwidth and disk space is available.

@iTnews_au @PeteLawler In the worst case, if they are competent mail should be delayed, not lost. The server shouldn't *crash*.

@iTnews_au @PeteLawler It may stop accepting mail, but that should be queued by a secondary/tertiary mail server for an org of that size.

“Quite frankly, we think that West Australians deserve better from their government than one which blames the results of shortcomings in its IT infrastructure on the actions of the very people whose democratic right they are meant to serve and protect.

“We reject absolutely the suggestions that Greenpeace should be held responsible for the capacity, or lack thereof, of the department to cope with members of the public exercising their democratic right to protest this brutal shark kill policy,” Greenpeace’s Sue Milthorpe told iTnews.

She said that Greenpeace would not be discouraged from email petitions as part of its campaigning into the future.

“Given the importance of email as an avenue of communication in today's world, it only makes sense that the people would use it to communicate with their elected representatives,” she said.

The DPC advised that it has put measures in place to “ensure that the system is not overloaded” as it continues to receive the shark cull emails. It said it is not aware of any data been lost during the incident.