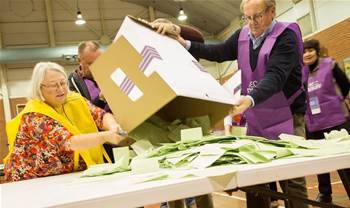 The federal government has committed $96.7 million to kick off a once-in-a-generation overhaul of the country’s 30-year-old election IT systems.

The funding, which will be provided over the next three years, will allow the Australian Electoral Commission to commence its long-overdue election system modernisation program.

It comes two years after the AEC revealed plans for the seven-year program, which commissioner Tom Rogers first called for in the aftermath of the 2016 federal election.

The overhaul will see the agency replace the 93 systems and supporting subsystems that support elections, as well as supporting mainframe infrastructure.

Most of the systems, which cover things like the electoral roll and election management, are bespoke and have been developed incrementally over the past 30 years.

They will be replaced by a new roll and election management system that can deliver service to both citizens and political parties and stand up to today’s cyber security environment.

Budget papers reveal the initial $96.7 million will “support contact centre modernisation and [a] new system for control of the AEC’s election personnel and logistics”.

It builds on an initial $2.4 million in last year’s budget to scope the overhaul. That funding also went towards planning the deployment of new polling place technology.

The funding will also be used for a temporary election workforce system to "ensure over 90,000 workers are efficiently deployed at every election".

Cormann said future investment will cover the "replacement of the electoral roll management technology, improvements to data analysis and the decommissioning of legacy systems".

"This investment in ICT upgrades will ensure the AEC can continue to efficiently run federal elections, while improving services for Australian voters."

Last month, AEC went looking for a new postal vote data capture solution in preparation for the next federal election in either 2021 or 2022.

The agency is also investigating the possibility of operating its electronic certified list system at “100 percent of polling places” in the future.