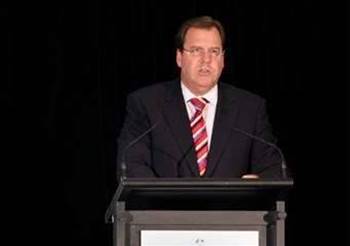 The Federal Attorney-General's second-in-command has encouraged the creation of a self-regulated industry code between internet service providers and rights holders to combat piracy issues.

He told attendees of the Copyright Law and Practice Symposium in Sydney that the speed, anonymity and cross-jurisdictional nature of online transactions meant "conventional" regulatory models had become "severely challenged".

"In order to safeguard and secure copyright ... we need to take a look at a new and somewhat unconventional approaches to information and law enforcement," he sold.

"My belief is that solutions will rely on new business models that create incentives for consumers and other market participants to comply with the copyright law and also the technological innovation of the copyright owners.

"They are going to emerge through cooperative agreements and participation between copyright owners and service providers."

The existing Copyright Act provided space for an industry code to be formed on the issue, he said.

While Wilkins is effectively willing to take a back-seat to industry discussion, he warned Government involvement is required to facilitate an agreement and ensure consumer protections are safeguarded in any resulting industry code.

The Attorney-General's department is set to conduct further meetings with internet providers before the end of the year.

Talks between service providers and rights holders have been held separately from those with Government.

Those have been underway since November last year, with Communications Alliance CEO John Stanton this week championing success in reaching leeway with most affected creative industries.

Stanton said parties had made "more progress in the last six months than in the past five years" but just what kind of code would eventuate remains unclear.

Vanessa Hutley, former Microsoft counsel and lead for music and wider content rights groups, said copyright holders had moved for a "graduated response" mechanism such as those implemented in France and more recently in New Zealand.

The French experience, she said, had proved successful. A total of 650,000 first notices had been delivered since implementation in January 2010, according to blog TorrentFreak, and 44,000 owners received a second strike.

A total 60 users faced termination of internet access on their third strike.

Australian representatives of content owners, however, had not condoned a termination mechanism. Instead, ISPs would impose an "effective sanction" against users after sending multiple "educational" warnings under the suggested regime.

Hutley declined to comment on threats from smaller rights holders to begin mass individual lawsuits such as those attempted over the past decade in the US.

She said the continued negotiations with service providers were the preferred method.

Holly Raiche, of the Internet Society of Australia, singled the US memorandum of understanding signed earlier this year as an example of effective cooperation as it required a verified connection between the infringement and the user who had infringed.

But she warned Australian ISPs will first have to agree on a uniform acceptable usage policy for users, as many currently differed wildly on copyright provisions.

Read on to page two for the alternate path - copyright law changes.