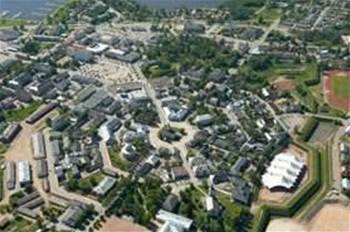 Footage of the building and site on the Baltic sea.

Google has released footage of its new data centre located in a former paper mill on Finland’s southern coastline.

The site lies in Hamina, a small town about 40 minutes from the Russian border and at the eastern reaches of the Baltic Sea.

According to Google, the data centre’s cooling system relies entirely on sea water drawn from the Gulf of Finland.

Google acquired the site in 2009 from the Stora Ensoe paper mill, which had already built key pieces of the cooling system, including a large tunnel that is used to draw in water from the sea.

The tunnel was constructed in the 1950s, according to Joe Kava, Google’s director of data centre operations and construction for Hamina.

The water pumped through the tunnel runs to the new direct exchange (DX) cooling systems.

After exhausting the water’s cooling properties, the system spits it back out to the sea - but, according to Google, not before it passes through a “tempering building” closer to the sea, where fresh and used water is blended to reduce impact of the backwash.

The highest temparature it is returned to the sea is 30 degrees celcius, according to Computerworld Sweden, which was recently taken on a guided tour.

Google purchased the site for around $74 million and currently employs just four people, but its expected to take on around 60.

Also, the data centre will house two large server rooms, the first of which is 8,000 square metres, according to the report.

An earlier video that Google released gives a clearer picture of the scale of the site after it was gutted but prior to renovation.