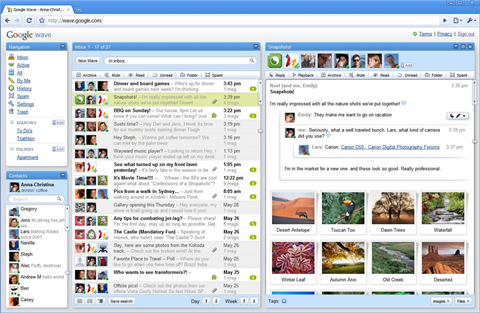 Devnet managing director Craig Deveson said a lot of cloud-based solutions have simply taken legacy server-based computer and made it available via the browser.

"Google Wave is a collaboration platform that unites email, instant messaging, blogs, wikis and other technologies into a single hosted conversation," he said.

"Our recommendation is that organisations running legacy solutions like Microsoft Exchange or Sharepoint, seriously consider the potential impact that Google Wave may have before embarking on any significant upgrades of those technologies."

Deveson said that the Wave protocol will allow anyone to become a Wave provider and share Waves with others, opening up enormous opportunity for innovation from all organisations.

"Devnet will push ahead to develop Wave-based services so that businesses, ISPs and government organisations can take advantage of this great platform and incorporate local and regional features," he said.

"The attraction is uniting the many disparate electronic communication tools in a single platform. Also many companies have resisted cloud computing because their data won't sit behind a firewall or reside on their own servers.

"With Google Wave a company's sensitive data can sit behind a firewall or we can manage it on a server and then we use an open source program to help connect to Google's Federated Wave servers globally."

Deveson said a number of companies, with 50-100 users are moving from Microsoft Exchange to Google Apps because maintaining hardware or software doesn't make sense.

"The channel for the past 20 years has been content with Microsoft related services and Linux," he said.

"Google has become a disruptive change because we are talking about technology that will leave Microsoft at the [starting] gate."

He said the Web company has already developed proven technology like, Google Android for mobile phones, Google Maps and the Google Web browser.

"Google Wave was developed in Australia by Lars Rasmussen and his team," said Deveson.

"They helped create Google Maps, so it's also a boost for the local software industry.

"This week [the country] may go into an official recession but not this part of the market."

Devnet is a Google enterprise partner that resells Google apps and services. The company also develops its own software and works with both resellers and end users.

"Resellers need to choose how they will move forward. Will they wait for Microsoft or Linux to come up with something new? Or will they  at Google offerings with us?" He said.

"We will be happy to work with them, we have channel goals which can help resellers customise Google apps to suit companies in this region."

Deveson said however there's an education process with resellers because of a lack of understanding from the community about Google's channel.

"That's why we need to work directly with a number of customers and work with more like minded partners to help expand our footprint," he said.

Would you consider partnering with Google? Did you know Google represented an alternative to both Microsoft and Linux? Let us know.