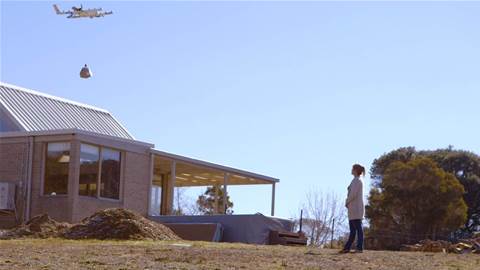 Google Australia has kicked off trials of drone deliveries for Mexican food chain Guzman y Gomez and Chemist Warehouse to farms on the NSW/ACT border.

Residents of the area face a 40-minute round trip to pick up supplies of any kind, and are therefore considered prime users for a drone delivery service.

Burgess said the first two retail partners for the trial would teach Google “what we need to do to ensure that orders are channeled to their staff smoothly and that they can easily load goods onto our delivery drones".

In the case of Guzman y Gomez, “we want to learn how much notice to give them for a drone’s arrival so that they can cook, pack, and load it in one well-timed workflow".

For discount pharmaceutical chain Chemist Warehouse, Google wants to understand how to pick and place products into packages that can be flown via drone.

“We’ll learn how to optimise how many items we’re able to deliver per flight.”

The trials on the NSW-ACT border are expected to run for several months.

They are also likely to extend to local emergency services, with Burgess noting plans to work with the Australian Capital Territory Rural Fire Service.