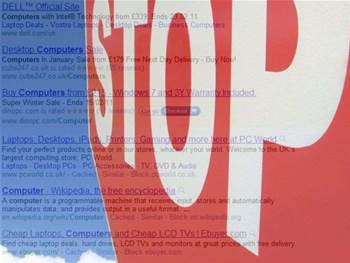 Google is hoping to weed out low-quality content from its search results with a new extension for its Chrome browser.

The Personal Blocklist extension allows Chrome users to block domains from their search results. That data is fed back to Google, which "will study the resulting feedback and explore using it as a potential ranking signal for our search results," according to the company's principal engineer, Matt Cutts, writing on the Official Google Blog.

The extension is principally taking aim at so-called "content farms" - sites flooded with poor quality, keyword-stuffed articles that exist purely to attract the search engines, and the resulting advertising revenue.

Google has often been criticised for allowing the content farms to feature so prominently in its search results, but the company has a policy of not manually editing results, preferring instead to rely on the strength and relevance of its search algorithms.

Once the Personal Blocklist extension is installed, a "block" link appears under each Google search result, which will filter that domain out of future search results on that computer. Users can unblock domains added accidentally by clicking on the extension's icon in the taskbar.

Got a news tip for our journalists? Share it with us anonymously here.
Copyright © Alphr, Dennis Publishing
Tags:
blockingcontent farmsgooglenewsecuritytargetstoolwith