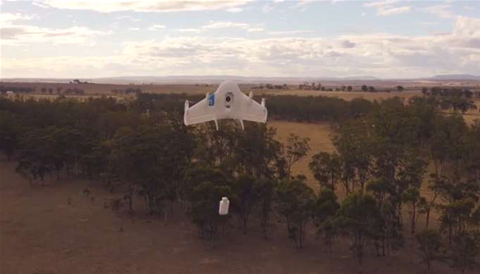 Google has been secretly working for two years on a drone-based delivery system for both dispatching products to customers and assisting in disaster relief situations.

The web giant today unveiled "Project Wing" - its latest effort in the autonomous vehicle space alongside experiments with self-driving cars - which sees it working to create a delivery system using self-flying vehicles.

The company built a system of drones near Warwick, in southeast Queensland, in partnership with Unmanned Systems Australia to test the flight abilities of the devices. It successfully delivered a first aid kit, chocolate bars, dog treats and water to Australian farmers this month, the search giant revealed in a video released today.

The 'tailsitter' drones fly at a height of between 40 metres and 60 metres. Google ran 30 delivery flights to farmers, the first of which managed to deliver to a site 1km away from the departure spot.

Early prototypes of the drones are 1.5 metres wide and 0.8 metres tall, weighing around 8kg, and consist of four electrically-driven propellers, a GPS, cameras, radios and a measurement sensor. The total weight of the drone plus the package it is delivering is 10kg.

"We’re only just beginning to develop the technology to make a safe delivery system possible, but we think that there’s tremendous potential to transport goods more quickly, safely and efficiently," Google said in a statement.

The delivery system, which Google detailed to the Atlantic, is being developed by the company's Google X lab. The team chose Australia due to its comparatively relaxed drone legislation (compared to the US).

Amazon late last year revealed it was testing its 'Prime Air' drone-based delivery service, which it said at the time was unlikely to be put into use for another four or five years.

The drones would pick up items from Amazon's distribution centres and fly them to customer's homes within around 30 minutes.

But the delivery of goods via drone in America are subject to rules by the country's Federal Aviation Administration (FAA) that are still being drawn up and are expected to be in place at some point next year.